Belarus' election is a challenge for Russia, EU 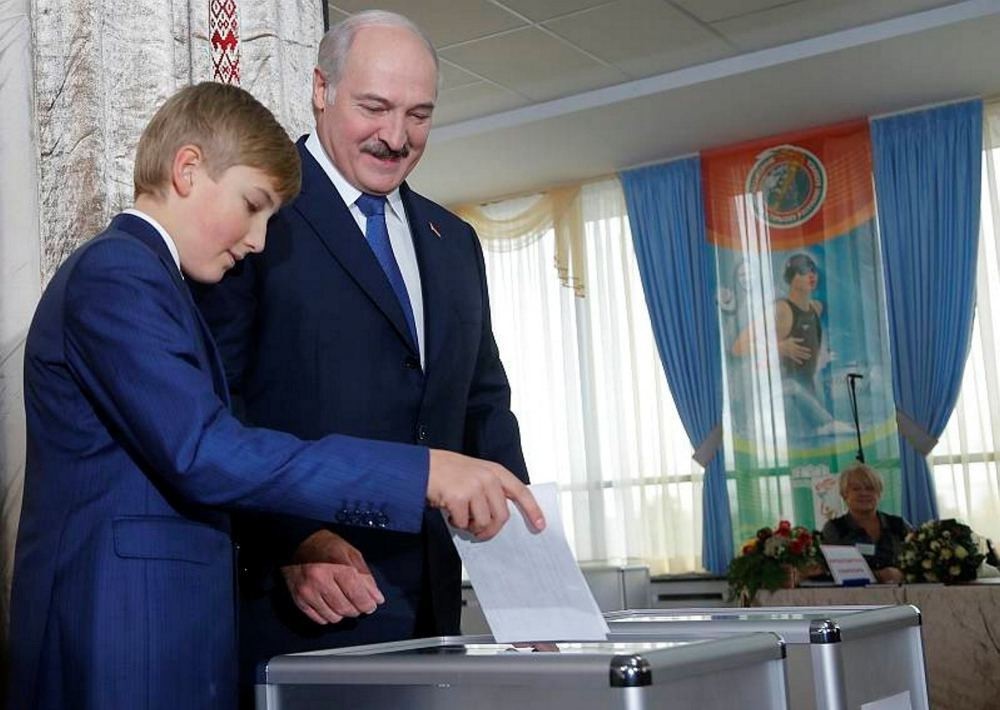 Belarusian President Alexander Lukashenko with his youngest son Nikolai casts his ballot at a polling station, during the presidential election, in Minsk, Belarus, Oct. 11, 2015.
by Daily Sabah with Wires Sep 10, 2016 12:00 am

Europe's last authoritarian state, Belarus is ready for the parliamentary elections which will take place on September 11 with no posters showing candidates' faces or even stating with parties are in the running at the streets of Minsk. Considering the absence of campaign material during election process, whether Belarusian President Alexander Lukashenko who has been in power since 1994 will be re-elected or not is of crucial importance for both Europe and Russia. The iron-fisted president Lukashenko was re-elected in presidential election to a fifth term last October.

Belarus is of geostrategic importance for both Russia and the E.U. Lukashenko launched a diplomatic push to mend ties with the European Union and United States damaged by Western allegations that he rigged elections and persecuted his political opponents.

Lukashenko has a strong incentive for conducting an election that might come closer to Western democratic norms than previous votes during his 22 years of rule. Belarus' Soviet-style command economy is faltering badly, gross domestic product fell 4 percent last year and is down another 3 percent this year and the country is eager for investment and assistance. Lukashenko, sometimes characterized as Europe's last dictator, secured a lifting of the United States and the European Union sanctions against Belarus this year by releasing all political prisoners and playing a role in trying to mediate the war in eastern Ukraine.

His diplomacy paid off in February this year when the EU ended sanctions that had been in place for five years. Belarus is now in discussions with the International Monetary Fund about a $3 billion loan. However, the country has limited room for maneuver because of its economic dependence. It is vulnerable over gas supplies as well as oil. In theory it could import gas from Poland instead, but would have to pay much more.

President Lukashenko, in power since 1994, has never been an easy partner for the Kremlin. He has frequently tried to play Moscow off against the West to extract the best deals for his country. Still, Russia has regarded Belarus as its closest ally. The two countries are officially designated as united in a "union state", though that body has no formal decision-making powers.

Lukashenko's stance changed after Russia annexed Crimea and then gave its backing to pro-Russian rebels fighting a separatist insurgency in eastern Ukraine. Like Crimea and eastern Ukraine, Belarus has a large Russian-speaking community who feel affinity with Moscow. "The Belarussian establishment and Lukashenko personally were scared by the situation with Ukraine," said Andrei Yegorov, the director of Minsk-based think tank the Centre For European Transformation.

Lukashenko declined to recognize Crimea as part of Russia, and put on hold discussions with Moscow about the Russian military establishing an air base on Belarussian soil.

"The behavior of our eastern brother cannot fail to worry us," Lukashenko said at a meeting with officials in Minsk in December 2014. "We are not a gigantic state, we do not have nuclear weapons, but our army is sufficiently capable to respond to any threat... Therefore we will protect our patch of land, our statehood, and our independence."

Lidiya Yermoshina, head of the Central Elections Commission, told The Associated Press that this election will be especially "active and democratic." Yermoshina, who in 2006 was banned by western officials from entering the United States or the European Union over allegations of election fraud, responded to accusations on state-run television in August.

A pre-election report by the observer mission of the Organization for Security and Cooperation in Europe notes that "the process of campaigning is strictly regulated. The campaign remains largely invisible." There are 488 candidates running for 110 seats, but critics point to problems they say foretell a rigged and unfair vote. The departing parliament has no opposition members.
RELATED TOPICS