No security in Austria for migrants as many consider leaving 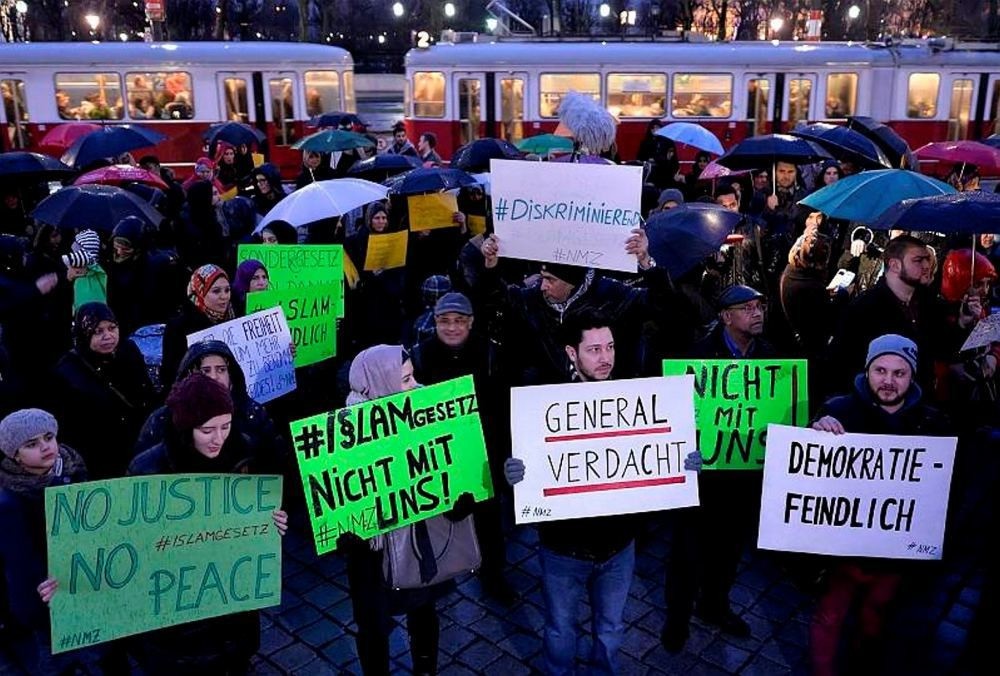 Protesters holding banners during a demonstration under the slogan u201cNew Islam law? Not with us!u201d in front of the parliament building in Vienna.
by Daily Sabah with Wires Sep 10, 2016 12:00 am

In the face of growing anti-Muslim rhetoric and rising far-right parties in Austria, over half of the migrants are considering leaving the country as they have been gradually feeling insecure in Europe

As growing Islamophobia in Austria poses a threat to the Muslim community, over half of the Turkish migrants living in Austria are considering leaving the country, according to a survey carried out by the Union of European Turkish Democrats (UETD), the Local Austria reported.

The results indicate that 53.5 percent said they would leave the country immediately if they had the chance, and 39.8 percent stated they would do so if they were offered financial compensation. Some 84.5 percent of those interviewed said they felt frustrated by the rising Islamophobia in Austria. According to the UETD survey, 42.7 percent are so unhappy they no longer want to live in Austria as they have felt threatened by the rising far-right parties and anti-immigrant rhetoric. Some 88.8 percent said Turkey would be their first choice other than European countries if they decided to leave Austria.

The survey was conducted amid an ongoing diplomatic row between Austria and Turkey. After the failed coup attempt in Turkey in 15 July, Austrian Foreign Minister Sebastian Kurz stated that Austria would no longer support Turkey's membership to the EU, warning that he would move to block any move that brings Turkey closer to joining the European Union. The Austrian Chancellor Christian Kern even went so far as saying that "the membership negotiations are currently no more than fiction."

The far right is ahead in Austria's presidential race, according to opinion polls, which predict a win for the anti-immigration candidate that would be a watershed for populists across Europe who have capitalized on the migration crisis.

A poll of 600 people on Sept. 7/8, published by the Oesterreich tabloid on Friday, showed the average support for Van der Bellen is at 48 percent, one point higher than a poll in late August, versus 52 percent for the Freedom Party's (FPO) candidate Norbert Hofer. Hofer, whose party argued against joining the European Union in a referendum on membership in 1994, has said Austrians should hold a vote on leaving the bloc if Turkey were to join or if significantly more political power were transferred to Brussels.

Concerns about security and national identity as well as dissatisfaction with traditional, more centrist parties, have fueled support for the FPO as well as the Front National in France and the far-right party Alternative for Germany (AfD).

Along with Austria, Europe has been witnessing a shift toward right-wing parties, which have been gaining popularity over fear of a refugee influx. Anti-immigration sentiments and xenophobia have become more visible in the country as a result of the efforts of political parties like the National Democratic Party of Germany (NPD) and the far-right populist Alternative for Germany (AfD) party as well as anti-Islam and anti-immigrant initiatives like the Patriotic Europeans Against the Islamization of the West (PEGIDA), which have staged anti-immigrant rallies and have drawn thousands of people throughout Europe. Several far-right parties have called refugees streaming to the continent "terrorists," a "ticking time bomb" and a Muslim "invasion." Despite warnings from other European political figures, this rhetoric still survives and has gained ground across Europe.
RELATED TOPICS