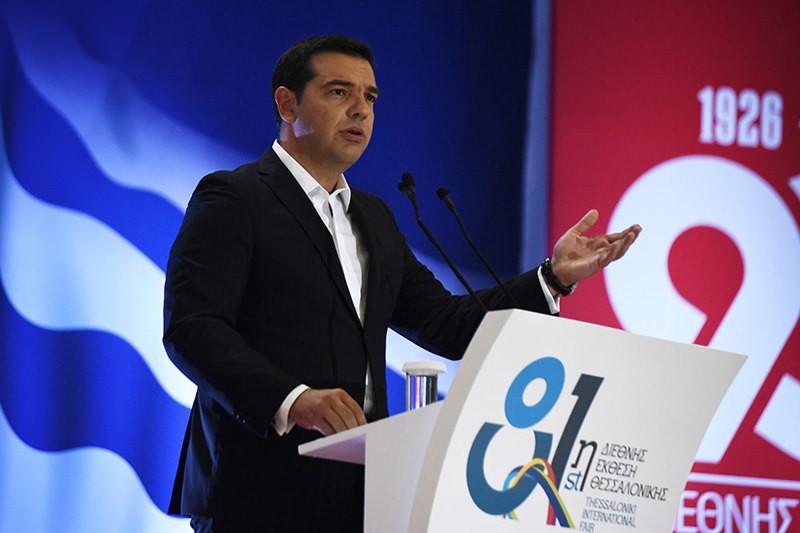 While daily illegal crossings in the Aegean Sea dropped to dozens from thousands after the EU-Turkey deal, the bloc yet to deliver its promises on financial aid and visa-free travel, around 3,500 migrants were picked off Libya coast over the weekend

Addressing a news conference at an international business forum in the northern Greek city of Thessaloniki, Tspiras stressed the interdependence between Turkey and the EU.

"[Greece] was in a very difficult situation, with the central European countries unilaterally closing borders and Greece having to accept thousands of refugees every day," he said, but cooperation with Turkey solved the crisis to cut the number of migrants crossing into Greece daily.

"Turkey mostly held up its end of the deal, the flows decreased from 5,000 to 50 or 60, meaning from a number that is not humanly possible to control," he said.

The prime minister added: "The deal states that we will stop the illegal flows but we will [also] create legal paths. These paths are the relocation and resettlement programs from Greece and directly from Turkey.

Meanwhile in the Mediterranean, another route used by migrants to cross into Europe, the numbers still remain high amid the lack of authority in Libya and inaction of the 28-nation bloc to cope with the situation.

Around 1,100 migrants were rescued off the coast of Libya on Sunday, bringing the tally over the weekend to 3,400, the Italian coastguard said, adding that those who were saved had left Libya aboard eight overloaded inflatable dinghies and two fishing vessels.

They were picked up by Italian coastguard and naval vessels, a British and an Irish warship and several ships chartered by humanitarian NGOs, the coastguard said.

The Aquarius, hired by the groups SOS Mediterranee and Doctors without Borders (MSF), said it had picked up 552 people, including women and small children.

On Saturday, 2,300 people were rescued from 18 small boats, heading to Italy.

The weekend's arrivals come on the heels of a big migrant wave at the end of August, when more than 14,000 people were plucked to safety in the space of five days. Most were from sub-Saharan Africa.

According to Italy's interior ministry, about 124,500 migrants have arrived since the start of 2016, just slightly more than the 122,000 recorded for the whole of last year.

Italy is sheltering growing numbers of would-be refugees as its neighbours to the north move to tighten their borders and make it harder for migrants to travel to their preferred destinations in northern Europe.

Turning to regional relations, Tsipras welcomed the rapprochement between Ankara and Moscow before outlining an ambition to turn Greece into an energy hub.

"We want the energy channels of the 21st century to go through Greece," he told journalists. "This is partially achieved with the trans-Adriatic pipeline because it starts the southern crossing of natural gas into Europe.

"If more pipelines appear at our borders, we will rush to welcome them."

Turkey and Russia are due to sign an agreement on the implementation of the Turkish Stream gas pipeline that will bring Russian natural gas under the Black Sea to Turkey and into southeast Europe via Greece.