Austria, without a president since July, postpones presidential elections to December 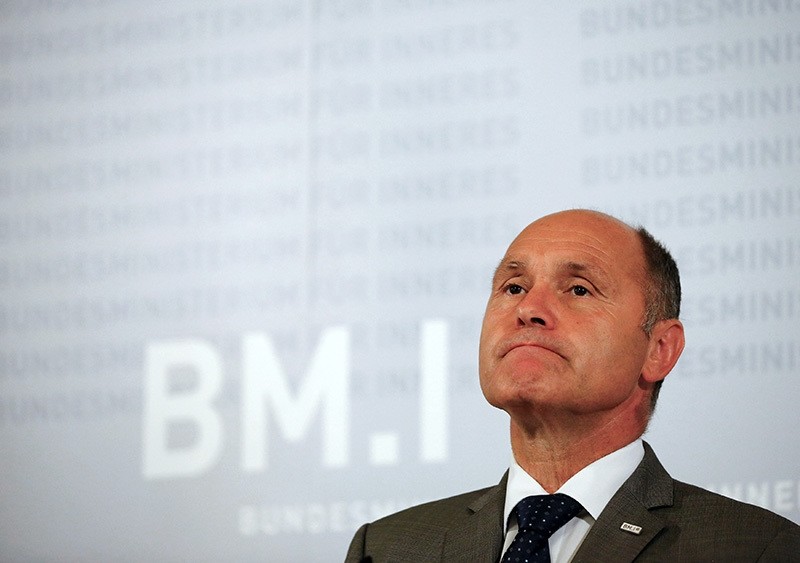 Austrian Interior Minister Wolfgang Sobotka addresses a news conference in Vienna, Austria, September 12, 2016. (Reuters Photo)
by Sep 12, 2016 12:00 am
The re-run of Austria's presidential election on October 2 needs to be postponed because of problems with glue on postal votes not sticking, the interior minister said Monday.

"We are going to request that parliament approves a postponement of the election," Wolfgang Sobotka told reporters. Possible new dates are November 27 or December 4, he said.

The postponement is a further embarrassment for Austria, a wealthy and advanced Western democracy and EU member, and for the government of Chancellor Christian Kern.

Austria has been without a president since July 8 when Heinz Fischer stepped down. He was replaced on an interim basis by the speaker of parliament and two deputy speakers.

The last election result from May was annulled after Austria's highest court in July upheld claims of procedural irregularities made by the narrowly-defeated far-right.

That necessitated fresh elections but this time, there have been problems with glue on envelopes on some of the hundreds of thousands of postal votes not sticking, making them invalid.

On Saturday, independent ecologist Alexander Van der Bellen joined his rival in the vote, Norbert Hofer from the far-right, in saying he now expects a postponement.

Pushing the election back poses legal problems, however, and the government is considering drawing up special legislation or even changing the constitution to allow it to happen.

Another question is whether to update the voter register as, since the last election, tens of thousands of voters have died, while a similar number have turned 16 and can now vote, media reports said.

Strictly speaking, however, this would not be a repetition of May's election.

The May 22 vote, a run-off after a first round in April, saw Van der Bellen narrowly beat Hofer by just 31,000 votes.

The FPOe has stoked concerns about recent record immigration, and should Hofer eventually win it would make Austria the first country in Europe since 1945 to elect a far-right president.

The role of the Austrian president is largely -- but not entirely -- ceremonial, and a victory by Hofer would be a major boost to Europe's other surging populist movements.

The far-right has jumped on the problems with the election as proof that Austria needs to be shaken up. "We just want our country back," Hofer said in a Facebook video.

The annulment of the May election result was also due to problems with the 700,000 postal votes cast, although these included votes being counted too early or by non-authorised officials.

The FPOe has called for the election to be held without postal votes. Had the postal votes been excluded in the May ballot, Hofer would have won.

But government officials have rejected the idea.

"Getting rid (of postal votes) is out of the question for us. We want as many people as possible to take part in the election," said Reinhold Lopatka, parliamentary head of the centre-right People's Party.