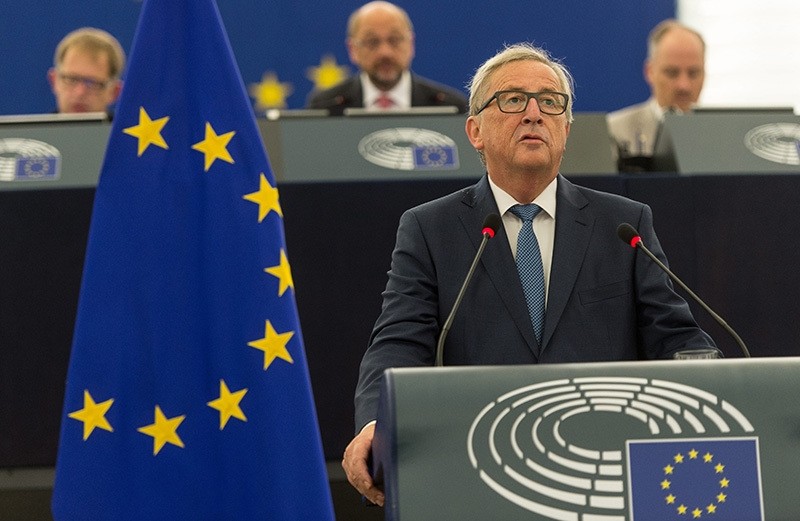 With Britain walking away and some eastern nations routinely showing open hostility, the European Union's chief painted a bleak picture Wednesday of the bloc and implored the 27 remaining nations to stop bickering at a time when ever more people question its relevance.

While the U.S. president almost invariably lauds a strong union in his State of the Union address, European Commission President Jean-Claude Juncker's annual speech to the European Parliament was rife with awkward truths.

"We should admit we have many unresolved problems," he said, and asked an existential question about the future, if any, for the EU — "will Europe disappear from the international scene?"

After a half-century of unremitting growth, the EU has stalled, as was highlighted by June's shock referendum result in Britain, when it became the first member state ever to decide to leave the constantly expanding bloc.

"The facts are plain: The world is getting bigger. And we are getting smaller," Juncker said, adding that only standing together, however difficult that is, can fix the problem.

Juncker wants to reinvigorate the union from within, despite the chorus of voices criticizing the EU's centralized decision-making and institutions.

He specifically said the EU must do more in the defense field, and no longer be overly dependent on the U.S. He said it should start with the creation of an EU military headquarters and work toward a common military force.

Juncker said greater defense cooperation also makes economic sense for the bloc's member states, since it would reduce wasteful duplication of effort by individual nations, and he called for a specific defense fund before the end of the year to boost common research projects.

Nigel Farage — a leader of the campaign for the U.K. to leave — said the speech was more of the bad old EU, of increased power-grabbing.

"It is clear that no lessons are going to be learned from Brexit," he said. "Indeed (Juncker's speech) was the usual recipe — more Europe, in this particular case, more military Europe."

Last year, Juncker drew up an obligatory scheme for member states to share 160,000 refugees in Greece and Italy and any other overwhelmed country among their EU partners. Slovakia and others have refused to take part. Hungary even launched a legal challenge.

One year on, fewer than 5,000 refugees have been moved and on Wednesday, Juncker acknowledged his power had met its match. Instead of obligatory, he said, "solidarity must be voluntary, must come from the heart."

It cuts to the core of the power struggle within the EU, as the 27 EU leaders, minus Britain's Theresa May, meet in Bratislava on Friday, looking for ways to move forward.

With Europe wracked by fears over extremism, the refugee emergency and economic woes, Juncker told legislators that EU integration cannot be for individual member states to manage alone and insisted that "too often national interests are brought to the fore."

"We have to stop this war according to which all success is national and all failure is European," Juncker said.

Eastern member states have been arguing against too much EU integration and the specter of a federal European superstate, and the issue is expected to be the main battleground for months, even years, to come as the EU deals with the fallout of Britain's departure.

"People in Europe don't want this petty envy between the various institutions," he said at the assembly in Strasbourg, France. "They want results. The next 12 months are decisive if we want to realize our union."

Britain still has to officially trigger the exit negotiations to become the first member state to walk away from Europe's biggest unity project. Juncker said, "we would be happy if the request for Brexit could happen as quickly as possible so that we could take the specific steps which need to happen."

There are fears the EU is facing paralysis until Britain decides to move. Juncker also warned that Britain should expect not to get the same access to the EU's unified market as if nothing happened.

"There can be no a la carte access to the single market," he said.

Juncker highlighted the reunification of Cyprus as one area where "Europe is a driving force". Reunification talks between the Greek and Turkish communities on the island resumed in May 2015 and are expected to be resolved by the end of this year with the formation of a federal administration.

Here are the key points from his annual State of the Union speech to the European Parliament:

Juncker called for setting up an EU military headquarters to coordinate efforts toward creating a common military force with assets "in some cases owned by the EU."

But he insisted the plans would not undermine NATO, which shares many members with the EU.

Britain, which voted to leave the EU on June 23, had previously strongly opposed any move towards an EU army.

Juncker also suggested making EU foreign policy chief Federica Mogherini a fully-fledged foreign minister for the bloc and giving her a seat at the negotiating table in the Syrian conflict.

Juncker proposed doubling his flagship investment fund to 630 billion euros ($707 billion) by 2022 in a bid to boost the economy.

The initial aim of the Investment Plan for Europe, which was first announced last year, was to mobilize 315 billion euros over three years.

It finances projects deemed too risky by the EU's European Investment Bank and is designed to overcome a massive shortfall in investment since the 2008 world financial crisis.

It works by leveraging about 21 billion euros in seed money from the EU budget and EIB into loans that back European start-ups. But EU states have been slow to pay in.

With the internet seen as a main driver for economic growth, Juncker proposed equipping the main public areas of every European city and village with free wireless internet access by 2020.

He is also pushing for Europe to convert to 5G mobile phone networks as early as 2018 in order to not lose ground to Asia and the United States.

The EU also plans to subject internet services like WhatsApp and Skype to similar rules that traditional telecommunications firms face.

Juncker announced plans for a radical overhaul of copyright law in Europe in a bid to catch up with the digital age and make the world's largest trading bloc more globally competitive.

It will shake up how online news and entertainment is paid for in Europe. Filmmakers and start-up investors fear it will hurt European innovation and help powerful media groups.

In a bid to encourage poor Africans to stay at home and avoid migrating to an overwhelmed Europe, Juncker launched an investment plan to stimulate Africa's economic growth.

He says the plan could raise 44 billion euros in investments, and up to 88 billion euros, if EU member states contribute.

More than one million people fleeing war and poverty in the Middle East and Africa flooded into Europe last year, sowing divisions across the bloc and fueling the rise of far-right parties.

In a bid to strengthen Europe's external borders against the migrant influx, Juncker called for a new EU border and coastguard force to start work quickly with 200 guards and 50 vehicles deployed in Bulgaria by October.

Following terrorist attacks that have killed more than 200 people in France, Belgium and Germany in the last year, Juncker also promised to introduce by November a new automated travel information system to determine who has the right to enter the bloc.
Last Update: Sep 15, 2016 12:36 pm
RELATED TOPICS