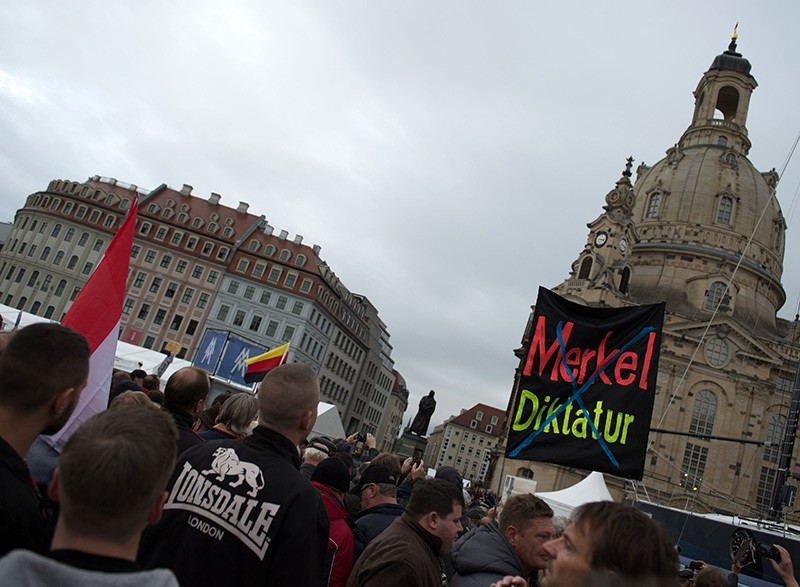 Supporters of the Pegida movement take part in a protest against German Chancellor Angela Merkel and her policy near the Frauenkirche, venue of festivities to celebrate the Day of German Unity in Dresden, Germany, on Oct. 3, 2016. (AFP Photo)
by Compiled from Wire Services Oct 03, 2016 12:00 am

Merkel arrived in Dresden to celebrate German Unity Day, the national holiday that marks the official reunification in 1990 of West Germany and former communist East Germany following the fall of the Berlin Wall.

But the chancellor was met with blaring whistles and hundreds of angry protesters chanting "Traitor of the people!" and "Merkel must go!" as she entered the church, which was surrounded by hundreds of protesters behind metal barricades that were lined with police officers.

The chants, mostly from men, continued after the holiday service, when the chancellor, President Joachim Gauck and Interior Minister Thomas de Maiziere exited the church.

Dresden, the capital of the eastern state of Saxony, is one of several cities in former communist East Germany where peaceful protests helped bring about the fall of the Berlin Wall in 1989. The city is also the home of the anti-Islam Pegida movement where weekly Monday protests against Merkel's migration policies have attracted upwards of 20,000 people.

During her visit to Dresden, Merkel met with the family of a local imam whose mosque in the city was bombed last week, government spokesman Steffen Seibert said on Twitter.

As thousands of refugees from war-torn Syria, Iraq and Afghanistan made their way across the Balkans last year, Merkel won international praise for her September 5 decision to accept and welcome refugees stranded in Hungary by border closures.

But pockets of German dissent toward Merkel have grown in recent months over her coalition government's liberal migration policy and the repetition of her "We can do it" motto, seen by some as politically naive in the face of concerns about sufficient funding and infrastructure for the migrant influx.

Flagging support for Merkel's refugee policies played a key role in last month's local elections in Berlin and Mecklenburg-Vorpommern, delivering dismal results for her Christian Democrats (CDU) and double-digit success for the Alternative for Germany party.

In recent weeks, Merkel and fellow CDU politicians have taken a more hawkish stance toward migration and integration policies, with De Maiziere proposing a partial burqa ban in August and Finance Minister Wolfgang Schaeuble calling for a German form of Islam in a weekend editorial.

But in remarks published by a Saxon newspaper on Saturday, ahead of the German Unity Day celebration, Merkel denied that she had changed her stance on migration.

"I don't see a change in course, but rather coherent work over many, many months," Merkel told Saechsische Zeitung newspaper.

Pegida, the anti-immigrant, xenophobic group that began in Dresden, initially drew just a few hundred supporters to demonstrations before gaining strength, peaking with rallies of up to 25,000 people in early 2015.

Its success has mirrored the march of anti-migrant parties in France, Austria and the Netherlands as well as Republican maverick Donald Trump in the United States.

Saxony, of which Dresden is the state capital, saw far-right hate crimes targeting shelters for asylum seekers rise to 106 in 2015, with another 50 recorded in the first half of this year.

In an annual report outlining progress since reunification, the government warned last week that growing xenophobia and right-wing extremism could threaten peace in eastern Germany.