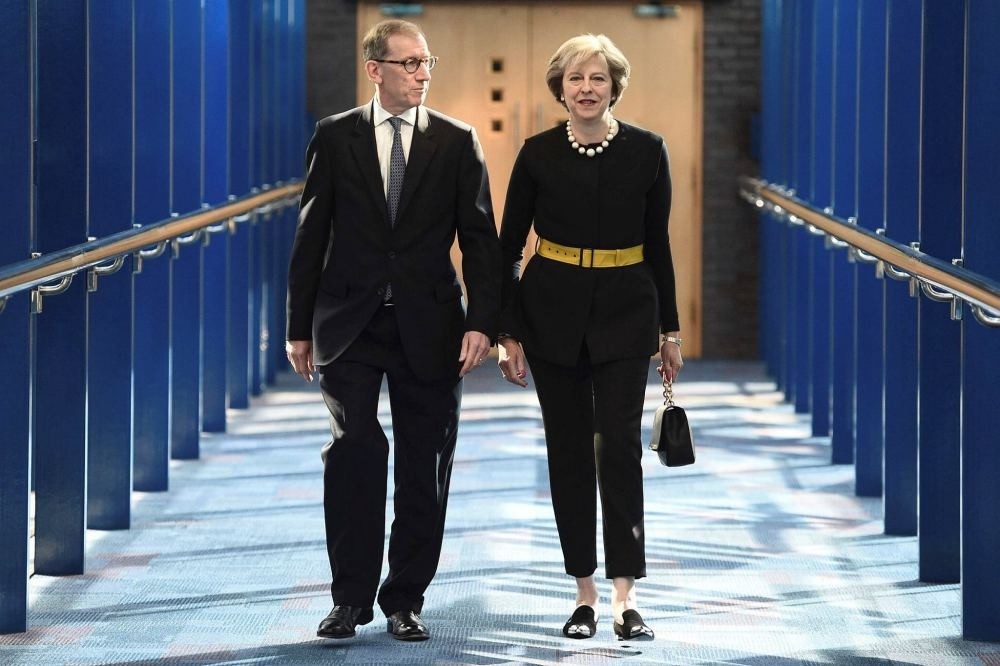 British Prime Minister Theresa May and her husband Philip John May walk along the bridge from the hotel to the International Convention Centre in Birmingham, central England, on Oct. 2 on the first day of the Conservative party annual conference.
by Daily Sabah with Reuters Oct 03, 2016 12:00 am

Britain will trigger Article 50 of the Lisbon Treaty on leaving the E.U. by the end of March 2017 as ‘Remain' campaigners demanded the British government release documents in last-ditch attempt to block Brexit

British Prime Minister Theresa May said on Sunday she would trigger the process to leave the EU by the end of March, offering the first glimpse of a timetable for a divorce that will redefine Britain's ties with it biggest trading partner. PM May's move on Brexit came amid series of legal challenges trying to block Brexit.

A crowd funded initiative "People's Challenge," secured their first major success after launching a legal bid requiring the British government to get assent from Parliament before triggering Article 50 of the Lisbon treaty, as reported by the Independent. In a bid to challenge Brexit, the British government was forced to reveal "undisclosed legal arguments" which it says means Article 50 can be triggered without parliamentary assent. High Court Judge Justice Cranston ruled that the Government should release the documents ahead of People Challenge's legal hearing on October 13.

Britain's shock vote to leave the European Union in June propelled May to power and the former interior minister has since been under pressure to offer more details on her plan for Britain's departure, beyond her often-repeated catchphrase that "Brexit means Brexit".

In a move to ease fears among her ruling Conservatives that she may delay the divorce, May will tell the party's annual conference in Birmingham, central England that she is determined to move on with the process and win the "right deal".

Using Article 50 of the EU's Lisbon Treaty will give Britain a two-year period to clinch one of the most complex deals in Europe since World War Two. "We will trigger before the end of March next year," May told the BBC's Andrew Marr show. "Now that they know what our timing is going to be ... [I hope] that we'll be able to have some preparatory work so that once the trigger comes we have a smoother process of negotiation."

May was expected to say she would trigger the divorce procedure early next year - a move the leader hopes will show voters that she is determined to deliver Brexit despite having campaigned, albeit quietly, for Britain to remain in the bloc.

For many of her lawmakers, the announcement hit the mark. "The timing is just right," Conservative lawmaker Andrew Bridgen told Reuters, saying that voters had understood that the new prime minister had needed some time to prepare her position.

Others said they feared that triggering Article 50 so early could put pressure on Britain as elections in France and Germany in 2017 could change London's partners in the middle of talks. Saying she did not want to give away her stance, May offered little insight into the question of where she would set the gauge in the struggle to balance controlling migration with winning tariff-free access to the EU's single market.

She said her government must respond to the demands of voters, many of whom fear that hospitals and schools are being stretched by high levels of migration from the European Union, but also had to listen to business. "I want the right deal for trade in goods and services and what we are doing at the moment ... is listening to businesses here in the UK, listening to different sectors, finding out what it is that is most important to them," she said. And she appealed to the EU, which has said "there will be no negotiations without notification" to open talks to smooth the way for Britain's exit.

"It's not just important for the UK, it's important for Europe as a whole that we are able to do this in the best possible way so we have the least disruption for businesses ... and when we leave the EU we have a smooth transition away from the EU," May said.

But while trying to keep EU partners on board, her move to repeal next year the 1972 European Communities Act, which took Britain into what is now the EU, and make Britain "a sovereign and independent country" was aimed directly at her party.

Some members of her Conservative Party said that what May has billed as the 'Great Repeal Act' was little more than a technicality, but others said it was the first step for Britain to reclaim power and dispense with some EU regulation.
RELATED TOPICS