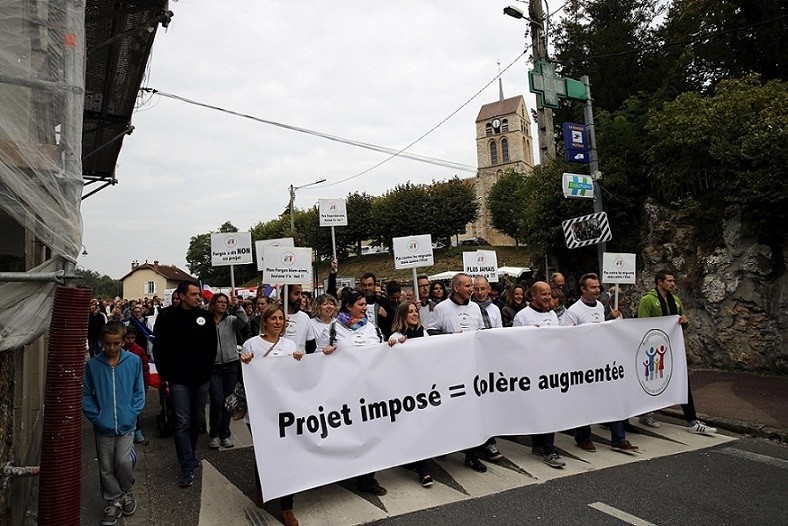 Local residents hold boards reading: ,Not Against Migrants, but Against the State, during a march against French governmentu2019s refugee policy in Forges-les-Bains, south of Paris, Oct. 8, 2016. (AP Photo)
by Associated Press Oct 08, 2016 12:00 am

French villagers are protesting the arrival of refugees and migrants who are being dispersed around the country as the government shuts down the slum-like camp in Calais that has become a flashpoint in Europe's migrant crisis.

Three competing rallies are being held Saturday in Pierrefeu in southeast France. The mayor led several hundred people protesting a government proposal to house refugees and migrants in an abandoned wing of a psychiatric hospital while they apply for asylum or study other options. Left-wing activists held their own, smaller rally to welcome the migrants.

Gendarmes stood watch but the morning gatherings were peaceful. The far-right National Front plans its own anti-refugee protest later in the day.

The National Front is urging mayors to resist the Calais relocation plan and is organizing or taking part in protests across the country this month. Resistance to immigration is central to the campaign platform of National Front leader Marine Le Pen in her bid for the French presidency in elections next year.

National Front politicians were also present at a protest Saturday in Forges-les-Bains south of Paris. About 200 people marched through town, past the farmers' market, school and town hall to protest the recent arrival of about 40 Afghan migrants relocated from Calais to an unused building in the center of town.

President Francois Hollande has pledged to close the Calais camp before winter and relocate as many as 9,000 refugees and migrants living there to 164 sites around France while they're cases are examined. The Calais camp has been an embarrassment to the French government and symbol of Europe's failure to find solutions to the refugee crisis.

Pierrefeu residents hostile to the refugees and migrants say they fear the newcomers will threaten security, and worry about potential tensions with the psychiatric patients.

"Even if we can understand the dismantling of Calais ... our small towns are not the solution for this dismantling. We are too small to host so many people," said Mayor Patrick Martinelli. The government is considering sending 30- 60 migrants to this town of 6,000 for three to five months.

The pro-refugee residents called for solidarity.

"I am ashamed because we repress the poorest. They need us, the people who are coming from abroad, and are dying in the seas. We have everything here, we are a rich country, we have a rich village," said lifetime Pierrefeu resident Laure Paul.

In Forges-les-Bains, villagers largely say they are not hostile to the refugees themselves — they just don't want the refugees in their towns. "Not Against Migrants, but Against the State" and "Plan Imposed from Above = Mounting Anger" read posters brandished at the march.