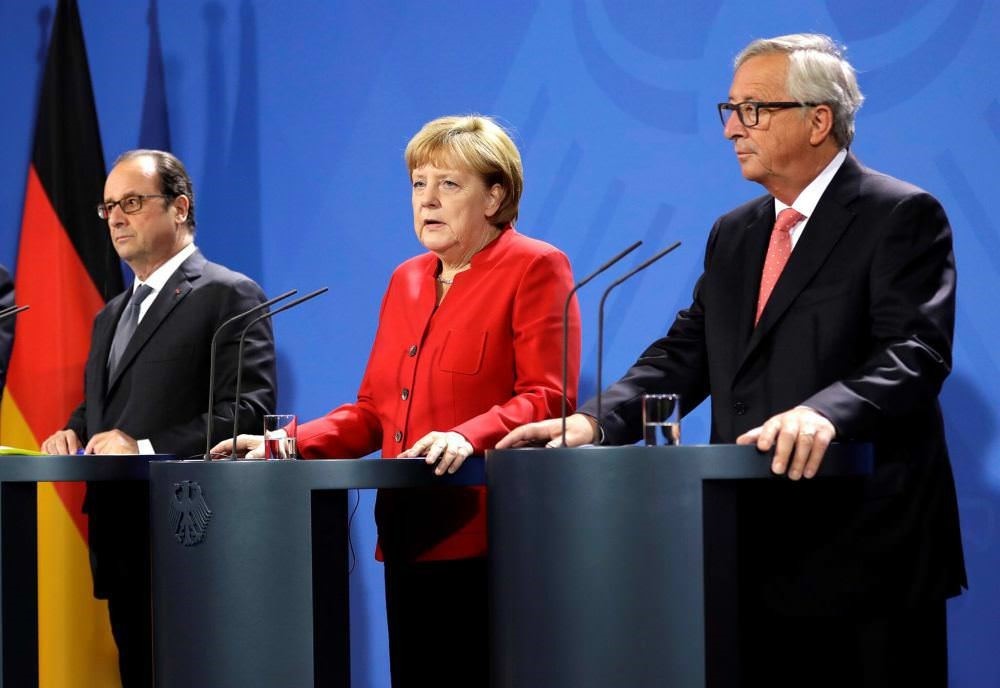 French President Francois Hollande, German Chancellor Angela Merkel and European Commission President Jean-Claude Juncker with representatives of the European Round Table of Industrialists in the chancellery in Berlin, Germany, Sept. 28.
by Compiled from Wire Services Oct 08, 2016 12:00 am

In the face of Britain's demands on the terms for its divorce from the EU, German Chancellor Merkel, along with other European leaders, hardened her stance against Britain

Britain cannot be allowed access to the EU's single market without accepting free movement of people, German Chancellor Angela Merkel said Thursday, hardening the line against Britain's Brexit demands. "If we don't say full access to the internal market is linked to full freedom of movement, then a movement will spread in Europe where everyone just does whatever they want," the chancellor told business leaders from the BDI industry federation.

Merkel urged German firms to back Berlin's tough line on Brexit even in the face of potential economic harm, or risk undermining the European Union. "We have to make our interests align so that European industry federations don't put pressure on us" during talks with London, Merkel told the annual BDI gathering.

Some British politicians are confident that industry groups on the continent, fearful of losing their access to the UK, will push for a deal retaining Britain's access to the EU single market while limiting migration across the Channel.

The chancellor acknowledged the tradeoffs to be made would be "judged differently from one industrial sector to the next", but insisted that protecting the EU's four freedoms -- of goods, capital, people, and services -- was good for industry.

Merkel's comments come just days after British Prime Minister Theresa May said she would trigger by March 2017 the two-year talks to quit the European Union. While trying to keep EU partners on board, her move to repeal next year the 1972 European Communities Act, which took Britain into what is now the EU, and make Britain "a sovereign and independent country" was aimed directly at her party. Some members of her Conservative Party said that what May has billed as the 'Great Repeal Act' was little more than a technicality, but others said it was the first step for Britain to reclaim power and dispense with some EU regulation. Her remarks on immigration have sparked fears of a "hard Brexit", sending the pound into a tailspin and setting the stage for a showdown with European leaders. French President Francois Hollande sent one of the strongest warnings yet that Britain will have to pay a heavy price for leaving the European Union, while European Commission chief Jean-Claude Juncker said the bloc must be "unyielding" in the face of London's demands. Hollande called for "firmness" by the EU powers in Brexit negotiations to avoid the risk that other countries might seek to follow Britain's lead and leave the bloc. "There must be a threat, there must be a risk, there must be a price, otherwise we will be in negotiations that will not end well," he said in a speech Thursday evening.

His message was hammered home Friday by Juncker, who said the 27 nations Britain was leaving behind must not give way easily in what are set to be tense negotiations. "You can't have one foot in and one foot out," Juncker told a conference in Paris, warning that Britain risked "trampling everything that has been built" over six decades of European integration. "We must be unyielding on this point. I see the maneuvering [by Britain]," he added.

His remarks were aimed at British Prime Minister Theresa May who said Wednesday she wanted an exit deal that offered Britain "maximum freedom" to operate in Europe's single market while also maintaining control over immigration.
RELATED TOPICS