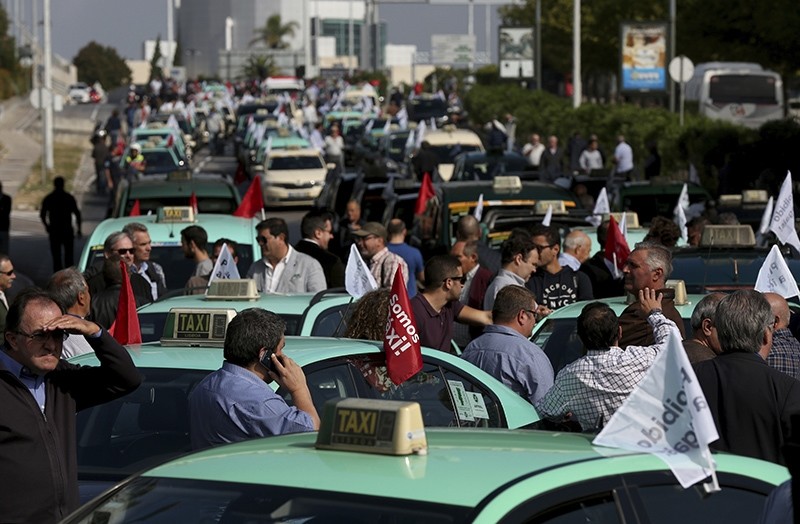 Portuguese taxi drivers complain that companies such as Uber and Cabify are not covered by the same tax, training and safety regulations as they are. They want the government to adopt specific legislation for ride-hailing services.

Without taxis, tourists arriving in Lisbon faced long queues to buy tickets for the metro or city buses, or resorted to ride-hailing apps which have angered taxi drivers.

Some walked with their bags in tow towards the city centre.

"It's a real pain. It will take me almost as long to get to my hotel as it took to get to Lisbon," said Roland Baak, 46, as he waited in line to buy a metro ticket after arriving from Amsterdam for a business meeting.

Portugal's two main taxi drivers' associations had said they expected 6,000 taxis from across the country to descend on Lisbon for the protest, their third against ride-hailing apps in just over a year.

Taxis honked their horns as they drove slowly towards the airport, creating delays during the morning rush hour.

The cabbies complain that ride-sharing companies like US-based Uber and Spain's Cabify are not covered by the same tax, training and safety regulations as they are and undercut their business.

The proposed law would require drivers that work for ride-sharing companies to have 30 hours of training, compared to 150 hours which is currently demanded of taxi drivers.

It would also require cars used by ride-sharing firms to be less than eight years old and ensure drivers have passenger insurance.

"This is a law that is tailor-made for these platforms and we will never accept it. We want the same rules for all," said the president of taxi driver association Antral, Florencio Almeida.

Business has boomed for Uber since it launched in San Francisco in 2011.

But the smartphone app has faced stiff resistance from traditional taxi drivers the world over, as well as bans in some places over safety concerns and questions over legal issues, including taxes.

Uber says it is not a transport company like taxi firms, and that it simply connects drivers with passengers.