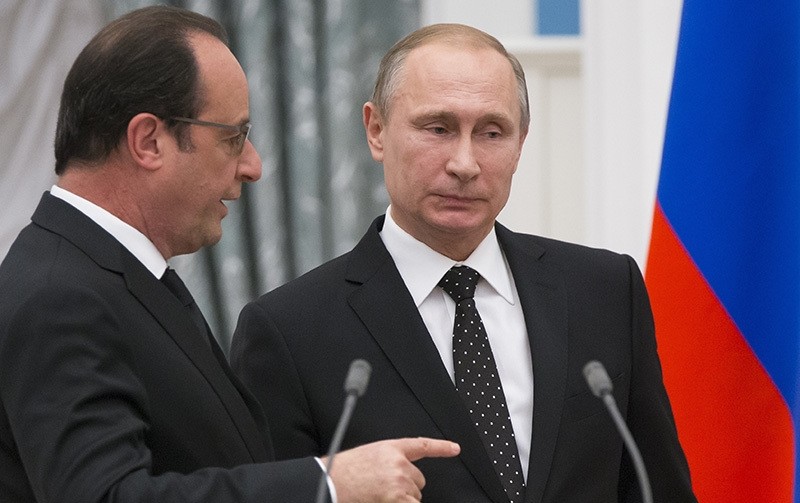 | AP Photo
by Oct 11, 2016 12:00 am
Russian President Vladimir Putin cancelled a visit scheduled for next week to Paris, as French President Francois Hollande said he would "only talk about Syria."

The Kremlin confirmed that Putin had called off the trip on Tuesday, a day after France said it wanted the bombardment of the northern Syrian city of Aleppo to be investigated by the International Criminal Court as a war crime.

The rift between Russia and Western countries over the Syrian conflict has only been deepening and two recent resolutions at the UN Security Council - one by France and Spain, the second by Russia - urging an immediate ceasefire in Syria failed to pass.

Hollande said that he agreed to Putin's visit "if it would allow us to talk about Syria, and only Syria."

The French leader was speaking to the Council of Europe shortly after the cancellation was confirmed by Moscow.

Hollande said that he was always open to a visit by Putin to discuss peace, especially in Syria, but added that he had declined to accompany the Russian leader during the inauguration of an Orthodox church that was scheduled in Paris.

"I made it known to President Putin that if he should come to Paris, I would not accompany him to the ceremony - but that I was ready to pursue dialogue over Syria," Hollande said.

"He preferred to postpone his visit, which doesn't prevent other occasions for discussion," the French president said. "But he will not come to Paris."

Kremlin spokesman Dmitry Peskov said that "since the beginning of contacts with his French colleague, Putin has noted that he will be ready to visit Paris at a time that is convenient for President Hollande. So we will wait until a convenient time appears," according to Russian state news agency TASS.

Russia has drawn Western condemnation for its continued backing of Assad regime and its role in the bombardment of Aleppo, the country's most populous city, parts of which are controlled by the regime, while others are held by various groups.

On Monday, French Foreign Minister Jean-Marc Ayrault called for a war crimes investigation into the bombing of Aleppo.

"Who has carried out the bombardments? There are the Syrians, but also the Russians, who have come with their sophisticated weapons that allow them to penetrate down to bunkers where people are trying to protect themselves," Ayrault said.

Meanwhile, Peskov, the Kremlin spokesman, said that there was no confirmation on whether Putin would visit Berlin on October 19 for talks with Hollande and German Chancellor Angela Merkel about the Ukraine conflict.

Russia's ambassador to France, Alexander Orlov, told Europe 1 radio earlier on Tuesday that Putin would travel to Berlin that day to meet with Merkel and Hollande.

The three leaders were scheduled to have dinner as part of the so-called Normandy format talks to end the conflict in eastern Ukraine.

The Normandy format, named after the French region where the talks first took place two years ago, comprises Ukraine, Russia, Germany and France.

Ukrainian President Petro Poroshenko's office said in an emailed statement Tuesday that he had not received any formal invitation to such a meeting in Berlin. Merkel's office also has not confirmed the meeting.
Last Update: Oct 11, 2016 5:02 pm
RELATED TOPICS