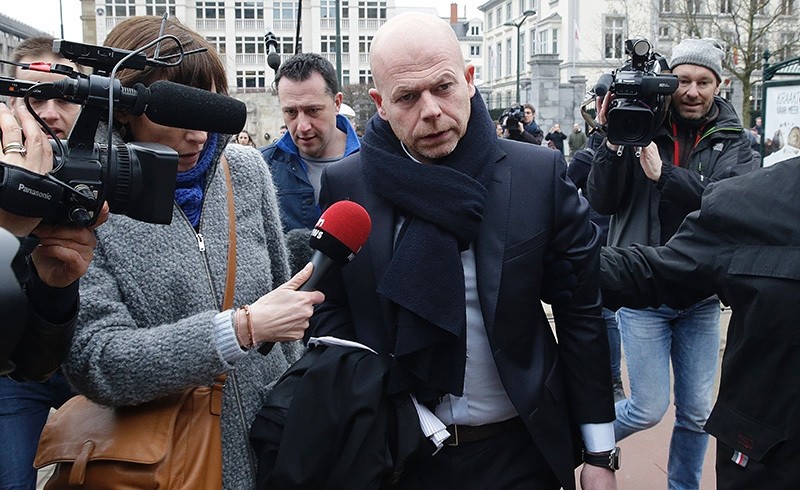 This file photo taken on March 24, 2016 shows Sven Mary (C), lawyer of key suspect in the Paris terror attacks Salah Abdeslam, arriving at the Council Chamber of Brussels (AFP Photo)
by Oct 12, 2016 12:00 am
Two lawyers for Salah Abdeslam, one of the key suspects in the Paris terrorist attacks of November 2015, announced Tuesday that they would no longer represent their client, who has chosen to remain silent in court.

Abdeslam's French lawyer Frank Berton said Abdeslam was reacting poorly to conditions in prison, where he is being held in isolation and under 24-hour surveillance.

"I am convinced that for months he has become isolated and radicalized; his video surveillance is something that he has experienced very badly," said Berton.

While the lawyer acknowledged it was a difficult thing to say for someone accused of taking part in the slaughter of 130 people during a string of coordinated attacks around Paris on November 13, Berton said that, "it is the reality, because nothing remains from that day other than his word, and he is reducing his speech; he will not say anything."

In an earlier interview with broadcaster BFMTV alongside Abdeslam's Belgian lawyer Sven Mary, Berton lambasted the surveillance as a "political choice" and said it was a waste.

"The true victims in all of this, at the end of the day, are the victims of the Paris attacks. Because they have the right to the truth, and to try to understand the incomprehensible," Mary told the broadcaster.

But in end, Mary said the trips to see Abdeslam in prison had felt ineffectual, like "social visits."

Abdeslam was transferred from Belgium to France in April after he was detained by the Belgian authorities on March 18. He had been sought for months in connection to the attacks in Paris, and also had ties with one of the men who carried out attacks on Brussels airport and an underground train station just four days after Abdeslam's arrest.

At a hearing in front of French judges in May, Abdeslam declined to give a statement.

He is thought to be the most prominent surviving member of group behind the Paris attacks. All of his suspected co-conspirators were killed or detonated suicide vests.

According to a French state prosecutor, Abdeslam may have intended to blow himself up at the Stade de France football stadium, where three others had tried to infiltrate the stands as a France-Germany match was under way.

His brother, Brahim, was one of the men who blew themselves up during the attacks.
Last Update: Oct 12, 2016 2:45 pm
RELATED TOPICS