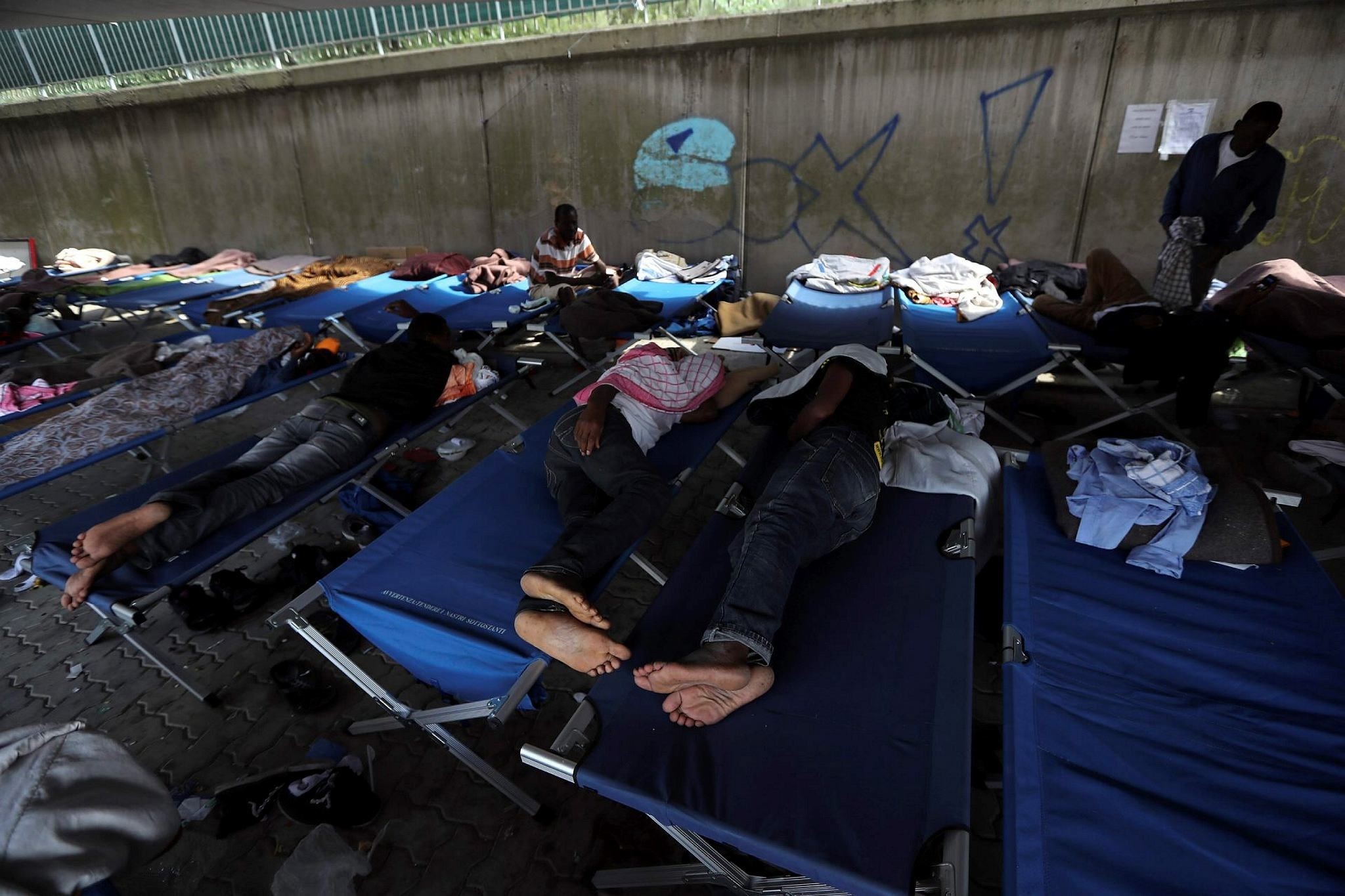 Migrants sleep on camp beds at a Red Cross center in the city of Ventimiglia on the French-Italian border on Sept. 14.
by Daily Sabah with Wires Oct 12, 2016 12:00 am

International human rights organizations have accused France of creating a mini-jungle camp in the city of Ventimiglia on the French-Italian border and blocking refugees' entry into France. "Refugees' living conditions in the Italian town of Ventimiglia are getting worse," said The Amnesty International and Caritas Internationalis.

Far from the crowded 'Jungle' camp in Calais, where migrants try to smuggle themselves aboard trucks bound for Britain, hundreds more are risking their lives to enter the other end of France from northern Italy. The frontier between Italy's Ventimiglia and Menton in southern France is already known as "Mini Calais."

More than 24,000 refugees have been residing in the Italian town since late September as France refused their entry into the country, as reported by French newspaper Le Figaro. French officials argue that refugees should remain at the Italian side of the border under the Dublin regulations. The Dublin Regulation decrees that asylum seekers must apply in the country through which they first entered the EU.

According to Italy's interior ministry, about 124,500 migrants have arrived since the start of 2016, just slightly more than the 122,000 recorded for the whole of last year. Italy is sheltering growing numbers of would-be refugees as its neighbors to the north move to tighten their borders and make it harder for migrants to travel to their preferred destinations in northern Europe.

President François Hollande has pledged to close the Calais camp before winter and relocate as many as 9,000 migrants living there to 164 sites around France. The first group of migrants is expected to be moved as soon as next week. Ahead of a meeting on Tuesday at France's Interior Ministry, homelessness charity Emmaus asked for postponing the closure because it says "all conditions are not met for an efficient humanitarian operation to take place." The camp is seen as a symbol of Europe's failure to find solutions to the migrant crisis.

An 18-hectare wasteland in the French port city was turned into a camp in April 2015. Hundreds of migrants were relocated by French authorities where there is no access to basic services. Most migrants coming from the eastern African countries of Eritrea, Ethiopia and Sudan and war-torn Syria intend to cross the English Channel and seek asylum in the U.K. As only a small number of refugees are eligible to enter European countries, the ones that can find shelter suffer from worsening humanitarian conditions in refugee camps.

As the French government shuts down the slum-like camp in Calais, French villagers have protested the arrival of migrants who are being dispersed around the country. The far-right party Front National (FN) urged mayors to resist the Calais relocation plan and is organizing or taking part in protests across the country this month. Resistance to immigration is central to the campaign platform of National Front leader Marine Le Pen in her bid for the French presidency in elections next year. In late September, far-right French mayors united against the possible flow of migrants into their towns, in fear of them becoming new jungle camps.
Last Update: Oct 12, 2016 2:23 pm
RELATED TOPICS