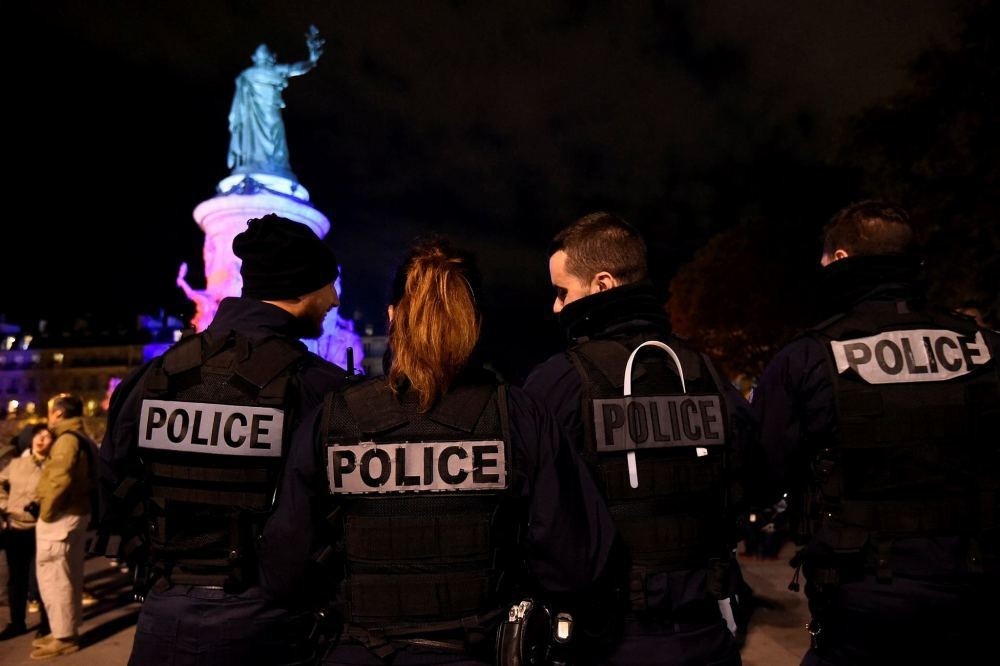 French police officers in service stand guard as their colleagues protest over mounting attacks on officers during a rally at Place de la Republique in Paris on Oct. 19.
by Compiled from Wire Services Oct 21, 2016 12:00 am

Witnessing an escalation of violence in protests, frustrated French police officers took to streets over 'unauthorized' anti-cop attacks since Monday across some of France's larger cities

The French government said on Wednesday it would come down hard on anti-police violence after officers staged a second night of protests over recent attacks on police and what they see as insufficient resources. President Francois Hollande and Interior Minister Bernard Cazeneuve on Wednesday both expressed "support" for the police, with Cazeneuve promising to address their demands. "The government is totally determined that justice is done each time that a police officer is attacked," Interior Minister Cazeneuve told reporters after meeting with police unions.Right-wing politicians have seized on the show of discontent to attack President Francois Hollande's Socialist government six months from an election. Hollande's opponents say the number of lawless no-go zones in France have proliferated during his mandate.

The unauthorized protest came after a recent Molotov-cocktail attack on police in a Paris suburb that left one officer in critical condition. Under French law, police may protest only when off duty, out of uniform and provided they leave their service weapons and vehicles behind.

In Marseille, around 100 police defied the restrictions Tuesday night, gathering in uniform in the pedestrianized Old Port in solidarity with their Paris peers.

Dozens of French police officers demonstrated Tuesday night in and around Paris and in the southern city of Marseille, the second wildcat protest in as many days over mounting attacks on officers. Around 400 off-duty officers demonstrated outside a police station in the suburb of Evry, near a town where a firebomb attack on a squad car earlier this month left one officer fighting for his life.

The protesters, who were in plain clothes with orange police armbands, held aloft banners reading "Solidarity with our colleagues" and booed the visiting national police chief.

The police have been up in arms over attacks on officers during patrols in tough suburbs and recent demonstrations over labor reforms.

Unions say a surge in criminal gang activity and militant attacks has put extra strains on police. Thousands of police and soldiers have been deployed to guard airports, train stations and other sites in response to militant attacks that have killed more than 230 people in France in the past two years.

Conservative politicians including former head of state Nicolas Sarkozy, who is seeking a return to the Elysée palace, have criticized Hollande's security record after a spate of militant attacks this summer. Cazeneuve said Hollande had created 6,300 new police jobs and 2,700 more officers would be recruited by next year to replace the thousands axed during Sarkozy's 2007-2012 presidency.

France has witnessed an escalation of violence in protests against labor reforms. France's socialist government, already embattled over controversial labor reforms, faces a fresh wave of protests and new nationwide strikes since May 2016. Before the Euro 2016 championships, many videos showed police and security forces apparently using disproportionate force on labor protesters amid a fresh wave of protests over a bitterly disputed labor law. French authorities ordered the removal of some of the videos showing police using violence on protesters, saying they posed a threat to security forces. French media has also been criticized on social media for not airing videos showing security forces using disproportionate force and for paying little attention to the issue.
RELATED TOPICS