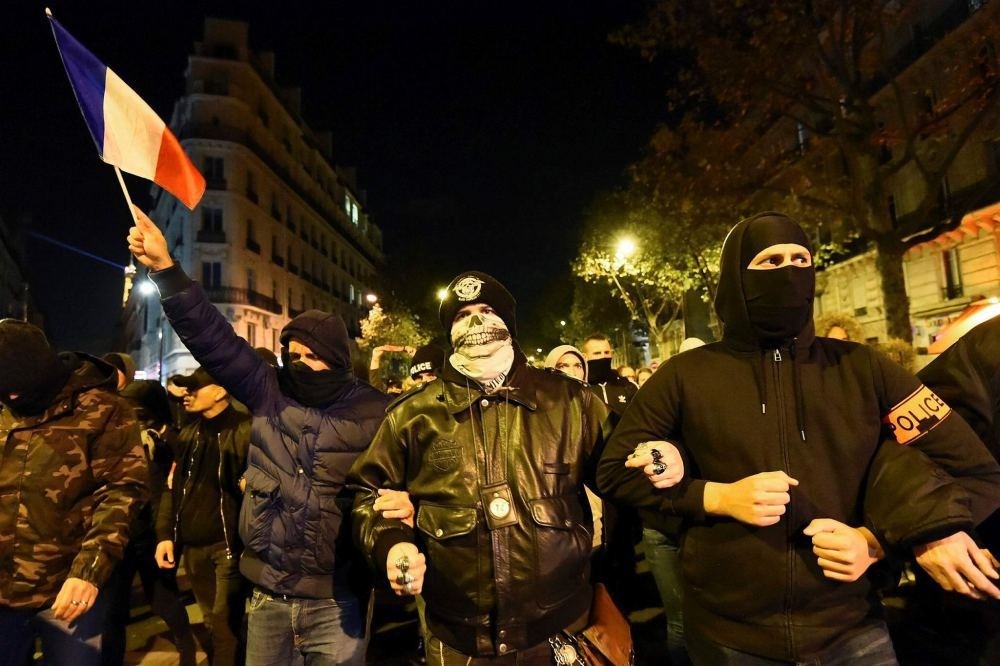 French police officers take part in a rally in Paris on Oct. 20 to protest over mounting attacks on officers.
by Compiled from Wire Services Oct 22, 2016 12:00 am
French police staged protests in Paris and other cities for a third night, with political opponents seizing on the unease to accuse Francois Hollande's government of failing on security just months before a presidential election. Police say they are no longer sufficiently equipped even to defend themselves and have staged three nights of unauthorized demonstrations. They called for reinforcements and stiffer penalties following a string of attacks on officers

Protests also took place in other French cities on Thursday night despite the government's efforts to contain growing anger among police as the issue of safety of law enforcement officers enters the presidential race.

Right-wing opponent Alain Juppe, the man polls suggest will become next president, on Tuesday decried what he called a loss of authority in the country, while Nicolas Sarkozy, also in the running for president, did likewise in even harsher terms.

A member of his own party also raised pressure on Hollande by calling on him to get tougher on gangland crime and stand aside to allow someone like Prime Minister Manuel Valls to run for president in the election in April and May next year. "We need someone else with a strong personality to come forward, someone who can offer hope," said Malek Boutih, a Socialist member of the lower house of parliament.

Around 500 officers, most dressed in civilian clothes and some with their faces partly covered, protested near the Eiffel Tower. "Police officers need recognition," Prime Minister Manuel Valls said earlier Thursday.

"They are loved by the French people, and not only since Charlie," he added, referring to an outpouring of sympathy for police following the attack last year on the Charlie Hebdo magazine.

The execution-style killing of a police officer during the assault by two extremists became one of the emblematic images of the tragedy, the first in a string of Islamist-inspired attacks that have shocked France.

"I call for calm and peace and I say to the police officers of France that they can count on my support, my solidarity, my understanding and my commitment," Valls said.

With security at its highest possible level, officers have been up in arms over attacks on police during patrols in tough suburbs and during street demonstrations. On October 8, a 28-year-old officer suffered serious burns when he was attacked with a petrol bomb on the outskirts of the capital. He remains in a coma. Police unions, which have already met with Interior Minister Bernard Cazeneuve, are demanding a meeting with President Francois Hollande and calling for fixed minimum sentences for attacks on the police.

Hollande said early Friday that he planned to meet with police union leaders at the start of next week. Under French law, police may protest only when off duty, out of uniform and provided they leave their service weapons and vehicles behind.

The Socialist government has accused former president Nicolas Sarkozy of cutting 1,000 police jobs during his 2007-2012 presidency. Sarkozy, who is bidding to clinch the right-wing nomination as he attempts to regain the presidency, described the accusations on Thursday as "lies." "I understand the anger of the police," said Sarkozy. "I've never seen such an erosion of authority in this country," he told Europe 1 radio
RELATED TOPICS