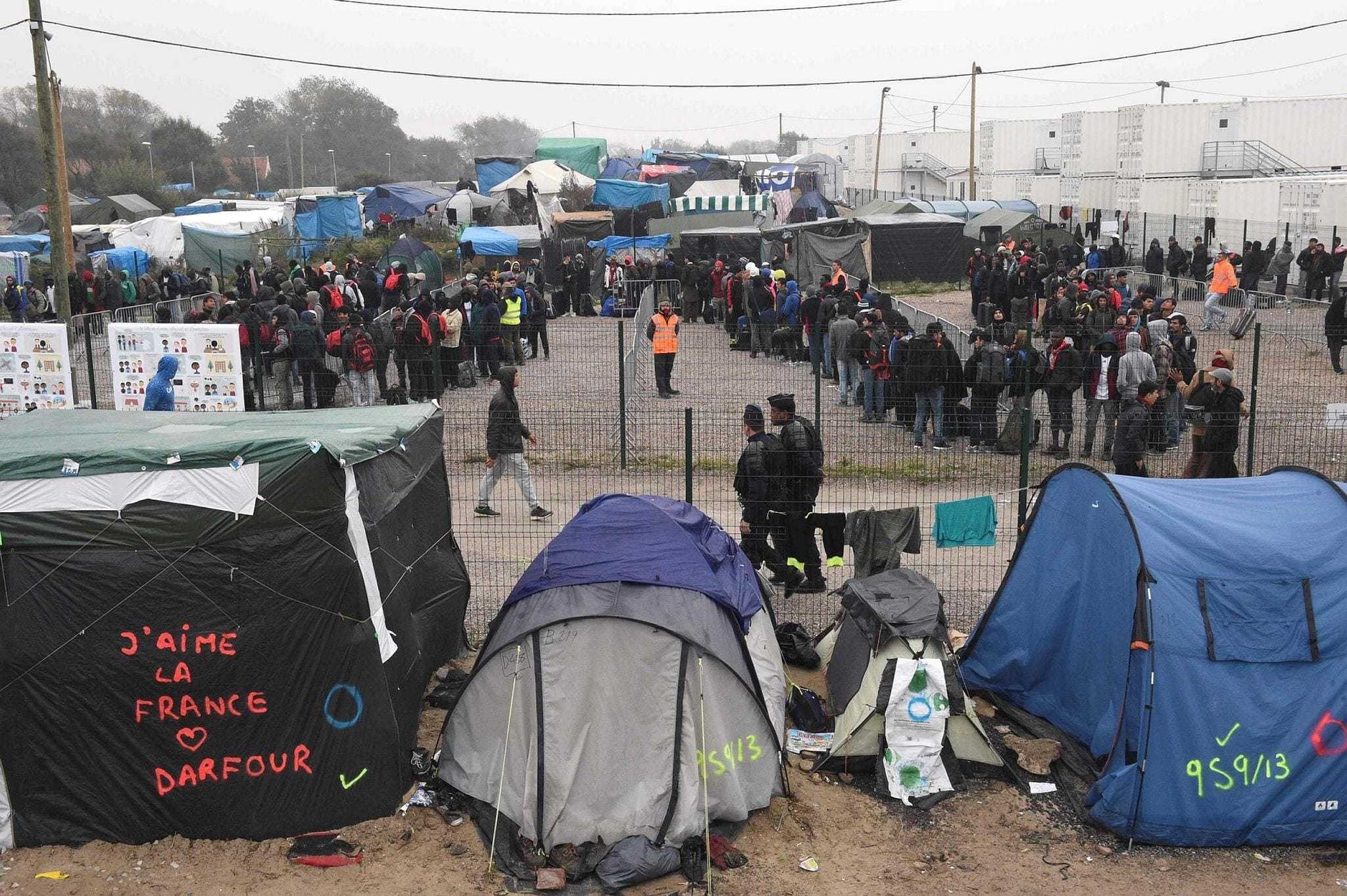 Migrants queue outside a hangar where they were sorted into groups and put on buses headed for shelters across France, as part of the full evacuation of the Calais ,Jungle, camp, in Calais, northern France, on Oct. 24.
by Compiled from Wire Services Oct 25, 2016 12:00 am

Dreaming of creating new lives in Britain, migrants in Calais's 'Jungle camp' face uncertain futures as buses are set to transport them to reception centers scattered around France

France began clearing the sprawling "Jungle" migrant camp in Calais on Monday, with hundreds carrying suitcases queuing outside a hangar to be resettled in reception centers across the country. The first buses departed less than an hour after immigration workers started the operation and officials predicted some 2,500 would leave on the first day. The first bus carrying migrants from the Calais "Jungle" ahead of the camp's demolition left for a shelter in central France on Monday morning, an Agence France-Presse reporter said. The coach transported 50 Sudanese to the Burgundy region. That night, armed police fanned out around the warehouse and across the squalid shanty-town after small groups of migrants burned toilet blocks and hurled stones at security forces in protest at the plans to dismantle the camp.

The Socialist government says it is closing the camp, home to 6,500 migrants fleeing war and poverty, on humanitarian grounds. It plans to relocate them to 450 centers across France. "I hope this works out. I'm alone and I just have to study," said Amadou Diallo from the West African nation of Guinea. "It doesn't matter where I end up, I don't really care." French Interior Ministry spokesman Pierre-Henry Brandet said that authorities had not needed to use force and that the large police presence at the camp on Monday was just for security.

Officials expect 60 buses to leave the camp on Monday. The government expects the evacuation will take at least a week. After the French Government announced the close of the Calais "Jungle" camp and plans of sending 12,000 migrants to various towns across France, French mayors from the far-right Front National (FN) united against the possible flow of migrants into their towns, fearing of becoming new jungle camps.

A far-right French mayor launched an anti-migrant poster campaign warning that "the migrants are coming," after the French government planned to send 40 people from the camp in Calais to the southern French town of Béziers and expressed plans to expand reception centers in the town. The poster saying, "The state is imposing them on us: That's it, they are coming," was put in many parts of the town on Oct. 11. French mayor Robert Ménard also shared the anti-migrant poster on his Facebook page, saying that, "We are informing the population." He also called for a referendum asking residents whether they want to welcome the refugees.

In a bid to protest the arrival of migrants who are being dispersed around the country, the far-right party Front National (FN) urged mayors to resist the Calais relocation plan. Resistance to immigration is central to the campaign platform of the National Front leader Marine Le Pen in her bid for the French presidency in elections next year.

An 18-hectare wasteland in the French port city was turned into a camp in April 2015. Hundreds of migrants were relocated by French authorities where there is no access to basic services. Most migrants coming from the eastern African countries of Eritrea, Ethiopia and Sudan and war-torn Syria intend to cross the English Channel and seek asylum in the U.K. As only a small number of refugees are eligible to enter European countries, the ones that can find shelter suffer from worsening humanitarian conditions in refugee camps. The "Jungle" has become a symbol of the Europe's biggest migrant crisis since World War II and a major source of Anglo-French tensions, leading President Francois Hollande to demand that the site be demolished before the end of 2016.
RELATED TOPICS