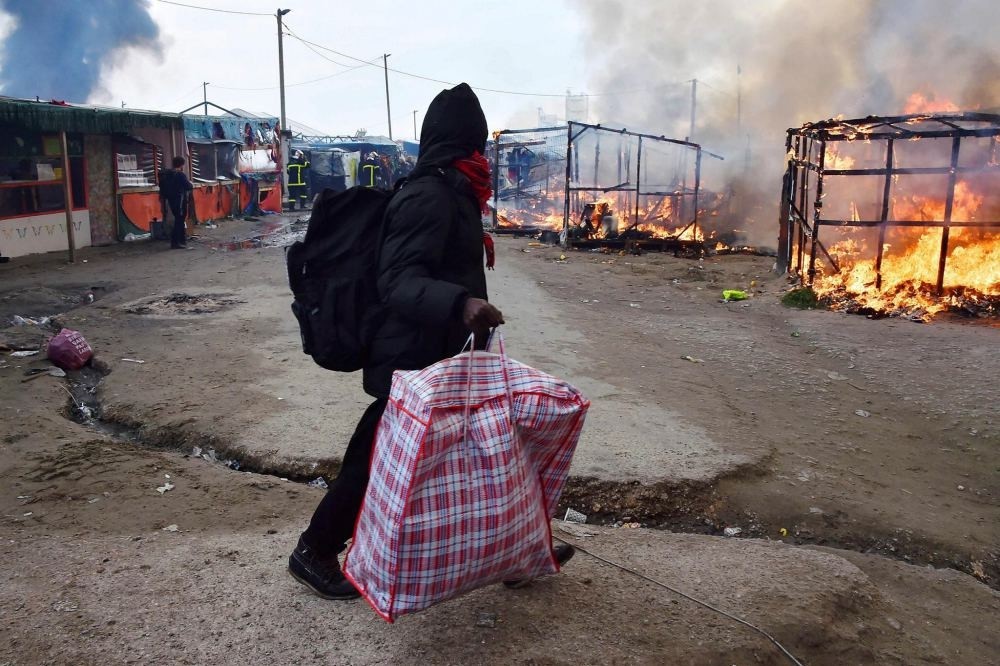 A migrant carrying his bags as he walks by makeshift shelters on fire at the ,Jungle, migrant camp in Calais, northern France, on Oct. 26.
by Compiled from Wire Services Oct 27, 2016 12:00 am

French authorities declared the Calais migrant camp known as "the jungle," empty yesterday, after fires set by departing migrants accelerated plans to evacuate people from the burgeoning slum. "There are no more migrants in the camp," said Fabienne Buccio, a local official in the camp. "Our mission has been fulfilled."

On the third and last day of the French authorities' operation to clear the camp of its thousands of inhabitants and resettle them across the country, migrants set more tents and shelters ablaze at the "Jungle" camp in Calais on Wednesday as others queued to be relocated and authorities resumed clearing the camp.

Local opposition to the squalid and unsanitary camp which at one point housed more than 6,000 people, along with criticism from right-wing politicians, has stung the French government into launching a clearing operation.

More than 5,000 migrants, who had come to Calais hoping to cross the short stretch of sea to Britain by trying to board trucks and trains or walk through the tunnel, have been bussed out of the camp and relocated around France. About 1,000 people were waiting at a transit center near the camp for transport.

"The operation will continue today to remove the empty shelters and to avoid them being set fire to again," a local government spokesman told France Info Radio as dawn broke to reveal the smoldering remains of what had once been one of the camp's main thoroughfares. But around midday large fires were set once again amid the wood, plastic and fabric of the camp and vast plumes of smoke rose about the site.

Nearly 800 unaccompanied minors have been moved to shipping containers converted into temporary shelters in the Jungle, according to the interior ministry.

France began the mass evacuation Monday of the makeshift migrant camp known as "the jungle," a mammoth project to erase the humanitarian blight on its northern border, where thousands fleeing war or poverty have lived in squalor, most hoping to sneak into Britain.

An 18-hectare wasteland in the French port city was turned into a camp in April 2015. Hundreds of migrants were relocated by French authorities where there is no access to basic services. Most migrants coming from the eastern African countries of Eritrea, Ethiopia and Sudan and war-torn Syria intend to cross the English Channel and seek asylum in the U.K. As only a small number of refugees are eligible to enter European countries, the ones that can find shelter suffer from worsening humanitarian conditions in refugee camps. The "Jungle" has become a symbol of the Europe's biggest migrant crisis since the World War II and a major source of Anglo-French tensions, leading President Francois Hollande to demand that the site be demolished before the end of 2016.
RELATED TOPICS