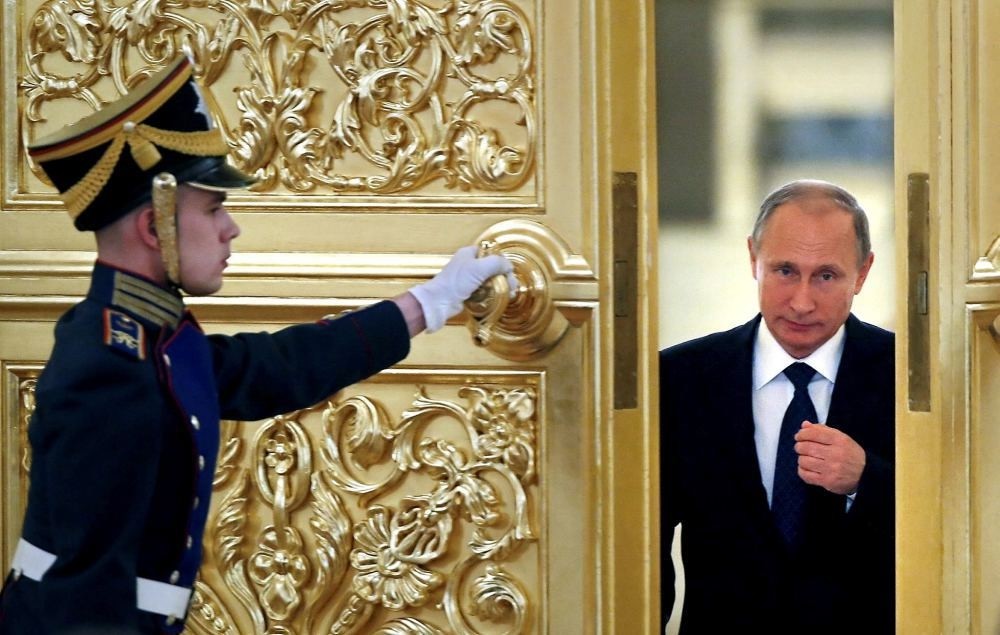 An honor guard opens the door as Russian President Vladimir Putin enters a hall at the Kremlin in Moscow.
by Compiled from Wire Services Nov 02, 2016 12:00 am

The United States and Britain are intensifying their actions against Russia, seeing Moscow as a growing threat for maintaining stability and security in their countries

The threat from Russia is on the rise, the head of the British domestic security service said in a newspaper interview Tuesday. The Kremlin on Tuesday dismissed as baseless claims by a British intelligence agency chief that Russia is acting in "increasingly aggressive ways" and using new technologies against the West.

Already chilly relations between the West and Russia have further deteriorated over disagreements over the conflicts in Ukraine and Syria.

Kremlin spokesman Dmitry Peskov told reporters Tuesday that Russia "could not agree" with Parker's claims. "We have repeatedly commented on cyber-attacks: as long as someone does not provide evidence, any statements - be they by the head of MI5, the president of the United States and other decision-makers - we will consider unfounded and baseless," Peskov said. "We cannot take any of these unfounded allegations into account."

Peskov added that Russia is using methods to "promote and defend its interests abroad" but they were in line with international law and focused on building "good and mutually beneficial relations with all partners."

Parker's claims in the Guardian newspaper come after British warships last month shadowed a Russian aircraft carrier battle group through the North Sea, which was en route to the eastern Mediterranean and thought to be sent to support Russia's military campaign in Syria.

A further worsening of relations between Moscow and the United States is in the interests of neither side, Nikolai Patrushev, the Secretary of Russia's Security Council, was quoted as saying on Tuesday.

"As recent history shows, relations between Russia and the U.S. will sooner or later return to a normal level, all the more so since it is in the interests of neither Moscow nor Washington to have a further degradation [of relations]," Russia's RIA news agency quoted Patrushev as saying.

Russia's defense minister is assailing NATO for applying pressure to deny port access to Russian warships en route to Syria's shores. Sergei Shoigu said yesterday the denial hasn't affected the mission of a Russian aircraft carrier group, adding that it has all the necessary supplies.

The Russian aircraft carrier Admiral Kuznetsov and escorting vessels are now in the Mediterranean, heading to Syria's coast. Russia had sought permission for some of the ships to call at Spain's North African enclave of Ceuta, but later withdrew its request as NATO allies piled pressure on Madrid over concerns that the ships could be used to ramp up air attacks in Syria. "It's time for our Western partners to determine whom they are fighting: terrorists or Russia," Shoigu said.
RELATED TOPICS