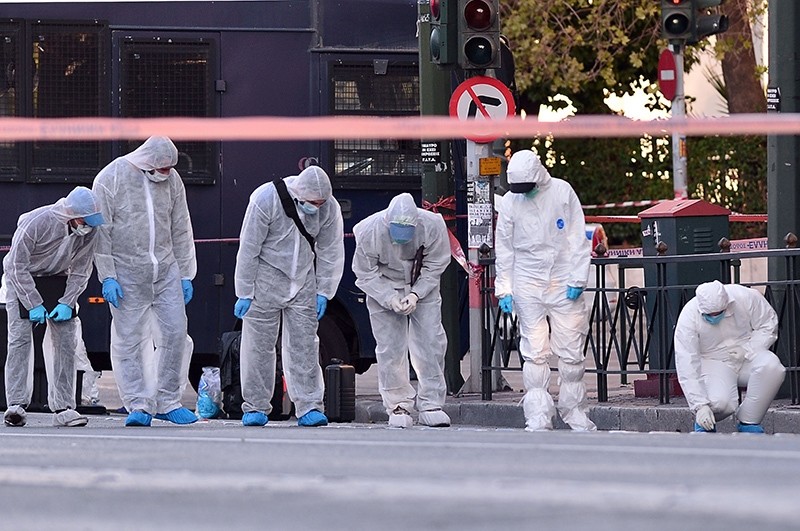 Police officers investigate at the front of the French embassy after two motorcyclists threw a hand granade injuring the guard early in central Athens on November 10, 2016 (AFP Photo)
by Compiled from Wire Services Nov 10, 2016 12:00 am
Unidentified attackers on a motorcycle threw an explosive device at the French embassy in central Athens early on Thursday, wounding a guard, police said, in an attack that comes less than a week before U.S. President Barack Obama visits the city.

"It was probably a hand grenade," one official told Reuters. "The building was not damaged, only externally, on the pavement. One officer, who was at the spot, was slightly injured."

The attackers were riding a motorcycle, according to footage from security cameras, another official said.

The explosion was heard in central Athens.

Greece's anti-terrorism police are investigating the attack, which happened at around 5am (0300GMT) on one of the city's main avenues and opposite parliament.

They said investigators have not ruled out a link to the rise of the extreme right in France, following the congratulatory message by National Front leader Marine Le Pen to Donald Trump on his US election victory.

Small-scale attacks on businesses, police, politicians and embassies are frequent in Greece, with its long history of political violence.
Last Update: Nov 10, 2016 11:54 am
RELATED TOPICS