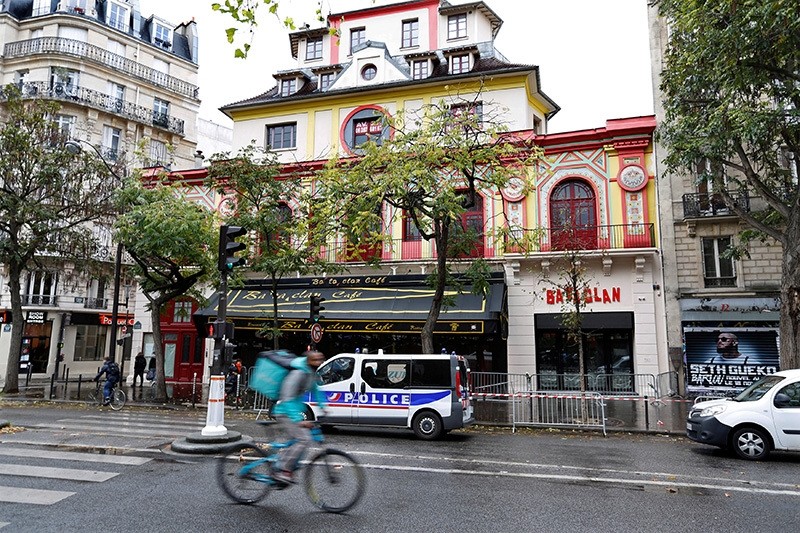 A view shows the Bataclan concert hall with its new facade almost one year after a series of attacks at several sites in Paris, France, November 8, 2016. Picture taken November 8, 2016. (Reuters Photo)
by Compiled from Wire Services Nov 12, 2016 12:00 am

A concert by British pop legend Sting is marking the reopening of the Paris' Bataclan concert hall one year after suicidal terrorists turned it into a bloodbath and killed 90 revelers with automatic weapons and explosive belts.

The coordinated attacks in Paris on Nov. 13 last year left 130 people dead and hundreds more injured and were the worst extremist attacks ever to hit France.

The Bataclan said all 1,000 Sting concert tickets sold out in "less than 30 minutes" and survivors and their families have also been invited to the Saturday night concert.

Sting, 65, is no stranger to the Paris venue. He played there decades ago in 1979 as lead singer of The Police. The singer's new album "57th & 9th" was released Friday.

Sting said the concert proceeds would go to two charities helping survivors. More than 1,700 people have been officially recognized as victims of the horror that unfolded at the Bataclan, Paris cafes and France's national stadium.

The concert hall — which has been refurbished to its original state — will remain closed on Sunday's actual anniversary of the attacks, when authorities plan to unveil a plaque outside to commemorate the victims.

In addition to those who died, nine people remain hospitalized from the attacks and others are paralyzed or otherwise irreparably injured. The government says more than 600 people are still receiving psychological treatment related to the attacks.

Sunday will mark the first anniversary of the deadly attacks. France has planned various events to remember the dead.

Commemorative plaques featuring the victims' names will be placed at each attacked site including targeted cafes and restaurants, the Bataclan concert hall and the Stade de France in Seine-Saint-Denis.

There will also be a "lantern ceremony" along the Canal Saint-Martin in the 10th arrondissement, close to the targeted restaurants.

A victims' association -- 3onze15 Fraternite et verite -- called on the French public to place a lit candle in their windows "as a show of support and to also say 'I won't forget'".

The first official tribute to the victims took place at Stade de France on Friday night at a 2018 World Cup qualifying fixture between France and Sweden.

A minute of silence was held in homage to the victims before kick-off.

The government is also to unveil a website displaying thousands of tributes collected at memorial sites which sprung up after the attacks.

Nine of the known attackers and four key accomplices are dead, while eight suspects are in custody in France and six elsewhere, including two in Belgium.

The sole surviving suspect, Belgian-born French national Salah Abdeslam, was arrested in Brussels in March and extradited to Paris, where he remains in custody.