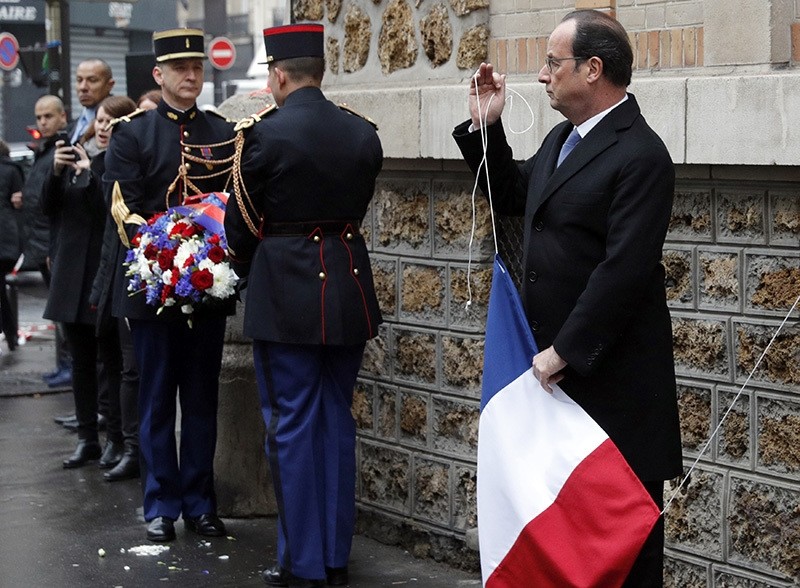 One year after a string of coordinated Daesh terrorist attacks across Paris left 130 dead and hundreds injured, France paid tribute to the victims on Sunday.

During the morning French President Francois Hollande unveiled a memorial plaque at the Stade de France national stadium in the northern Parisian suburb of Saint-Denis where three suicide attackers blew themselves up on November 13, 2015.

The plaque shows the name of a passerby who was killed in one of the explosions. During the course of the day, similar plaques are due to be unveiled at the five other sites where attacks took place.

In addition to Hollande, Paris Mayor Anne Hidalgo and Didier Paillard, the mayor of Saint-Denis, where some of the attackers were later found by French police, took part in the ceremonies.

The other sites include the restaurants and bars Carillon, Petit Cambodge, Bonne Biere, Comptoir Voltaire, Belle Equipe and the music hall Bataclan, which British singer Sting reopened Saturday evening with a concert in honour of the victims.

French and Paris leaders plan to dedicate a plaque to the victims and read their names aloud, deposit a wreath, hold a moment of silence and pay respect to the families of the victims.

On the night of November 13, 2015, groups of Daesh terrorists wielding guns and wearing explosives conducted a three-pronged assault in Paris - at the stadium, cafes and the music hall. The Daesh terrorist group claimed responsibility for the attacks.

Many of the attackers were killed on the same night, with three of them shot by police after taking hostages in the Bataclan music hall. The suspected ringleader Abdelhamid Abaaoud was killed with another suspected attacker in a police operation in Saint-Denis on November 18.

France upped its offensive against Daesh following the attacks, and the country has been split by tensions over questions of cultural identity and integration. Most of the attackers were French nationals who had become indoctrinated by Daesh ideology.