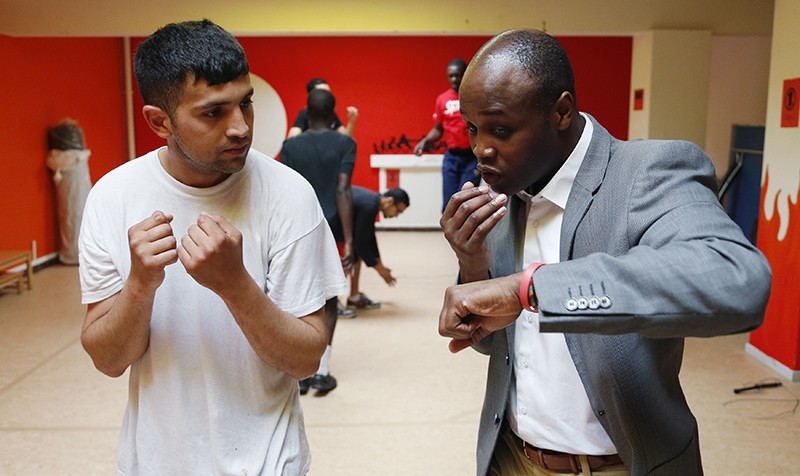 He was one of the best middleweight boxers of his time and is now a Belgian lawmaker, but Bea Diallo says he understands what turns youngsters to the dark side.

Diallo, a Liberian-born Muslim, says he is using the lessons he learned in the school of hard knocks to motivate young Belgians and even steer some away from Daesh terrorism.

"Boxing helped me become the man that I am today," Diallo told AFP after arriving from parliament to don a red bandana and boxing garb for a coaching session at his gym.

"Now I am trying to transform this force and this teaching that I have received for a generation that feels that it is lost and dropping out of society."

Diallo, the child of a Guinean diplomat father and a Senegalese mother, was caught up in violence in his own youth.

He became "ultra-violent, violent in the extreme" after an attack by skinheads in France in which a friend lost an eye, he said.

"If there had been the same context as today, where people are able to come and brainwash you, I could have ended up waging terrorism."

Since those dark days, Diallo has turned his life around.

After boxing, the 45-year-old married father of four became a coach, involved in running a gym, as well as serving as a city alderman and an elected member of the Brussels-capital parliament.

A familiar presence on Belgian TV, the socialist politician works on youth, employment and social integration while calling for democracy in Guinea, the country of his father's birth.

Meanwhile his gym has given him a ringside seat at the growth of Daesh terrorism in Belgium, the European country with the highest per capita number of fighters who have joined Daesh in Syria and Iraq, a figure estimated at 465.

He said his Emergence XL gym refuses to admit anyone who comes to radicalize youngsters.

Diallo often huddles in the ring with his students after sparring sessions to discuss Islam and other issues, claiming he managed to dissuade one of them from becoming radicalised.

Hassan Bousetta, a socialist politician and university professor, said Diallo is a role model for many young Muslims from Belgium's large Moroccan minority.

Although not yet a political "heavyweight", Bousetta said "he would become a national role model the day he becomes a minister".

Belgium's RTL television has meanwhile hailed him as a "symbol of successful integration in our country."

But it nearly all went wrong for him.

He went astray in his own youth before learning to channel his rage against injustice, the kind that drives some now toward terrorism.

Frightened and embittered by the skinhead attack when he was living in Paris, he got into fights and involved in gangs.

But he began emerging from what he called "a vicious cycle" after his father moved the family to Brussels. There, Diallo began reading the works of Martin Luther King and Mahatma Gandhi.

At 16 Diallo began boxing, immediately taking to its self-discipline and egalitarian spirit. He also began studying hard in high school and university.

In 1998, he beat American Rob Bleakley for the middleweight International Boxing Federation crown before a 50,000 crowd in Conakry and an international satellite television audience. He held the title for six years.

He said he learned the true meaning of jihad -- "struggle" in Arabic -- as the betterment of himself, and now wants to share his experience with a young "generation that is sometimes lost."

Diallo said he feels "very close" to young Belgians of Moroccan origin, sharing an African Muslim heritage and a legacy of colonialism, as well as the experience of being outsiders.

When he called for a moment of silence after the March 22 Daesh bombings that killed 32 people in Brussels, some grumbled -- but he scolded them.

"I said: 'What, why are you making these faces?' I said: 'Do you know who died? Muslims, Christians, Jews, Arabs, blacks and whites. They targeted everyone.'"