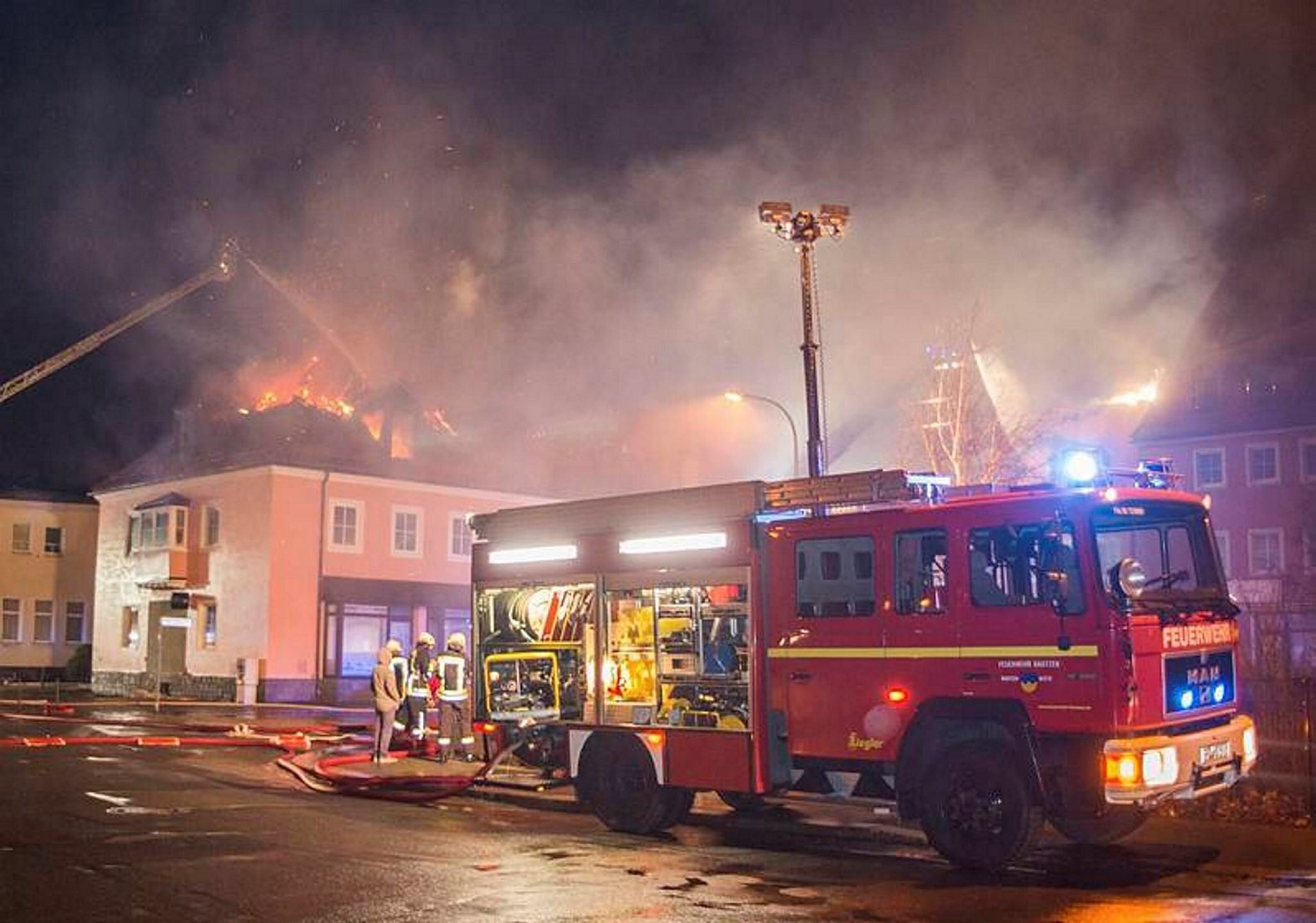 Fire fighters try to extinguish a fire at a former hotel that was under reconstruction to become a home for asylum seekers on Feb. 21 in Bautzen east of Dresden.
by Daily Sabah with Wires Nov 15, 2016 12:00 am

As hate crimes against migrants in Germany continue to rise, more than 450 attacks on German politicians and refugee helpers were registered this year, according to Federal Criminal Police (BKA) statistics published online Sunday by the weekly newspaper Zeit.

Some 317 of these offenses were directed against politicians and 144 of them against workers in migrants centers, the report stated. The acts were mostly motivated by right-wing extremists, the report also claimed.

The number of crimes against asylum-seeker accommodation centers in Germany was almost a third higher in the first 10 months of 2016 than in the same period last year, according to data released on Nov. 5, despite a drop in the number of refugee arrivals.

Between January and October, 832 crimes against asylum-seeker accommodation centers were recorded, the Federal Crime Office (BKA) told the Neuen Osnabruecker newspaper in response to an information request. A total of 637 crimes were recorded in the same period last year.

However, the statistics showed a downward trend as the number of attacks has dropped off since the beginning of the year. Should the trend of recent months continue, the total for 2016 is expected to be less than the 1,031 recorded in 2015.

The vast majority of the crimes was committed by far-right extremists (772) and most were cases of property damage (330).

Perpetrators distributing racist or right-wing propaganda accounted for 188 of the offences, and acts of violence accounted for a further 144. There were also 63 cases of arson and 12 violations of German explosives laws.

Asylum-seeker accommodation has frequently been the target of arson attacks and hate crime in Germany, as right-wing extremists lash out at Chancellor Angela Merkel's decision to allow 890,000 refugees and migrants into the country last year.

Germany expects to receive fewer than 300,000 migrants this year, the Federal Office for Migration and Refugees (BAMF) said Saturday.

However the estimate would only hold if the European Union's agreement on refugees with Turkey and deals with Italy and Greece were effective, BAMF head Frank-Juergen Weise told radio station MDR Aktuell. "Then we'll remain significantly below 300,000 people," Weise said.

Merkel, whose long-stellar approval ratings have taken a dive amid the refugee crisis, came under fresh fire over her pro-immigration policy stance. German Chancellor Merkel is suffering from low popularity, cutting a lonely figure in her struggle in resisting pressure to change her refugee policy. Even though Merkel defends her immigration policy and calls on all political parties to fight against xenophobic and Islamophobic rhetoric, her support is gradually diminishing in the German parliament and among political parties. Her party suffered an electoral blow in Berlin state elections, two weeks after being relegated to third place behind the anti-immigration Alternative for Germany (AfD) party in the regional election in her constituency in Mecklenburg-West Pomerania. She also lost her place in the Berlin elections. The AfD has capitalized on widespread discontent about the arrival of the large number of migrants, which it argues resulted from Merkel's promise of sanctuary to Syrian refugees.
RELATED TOPICS