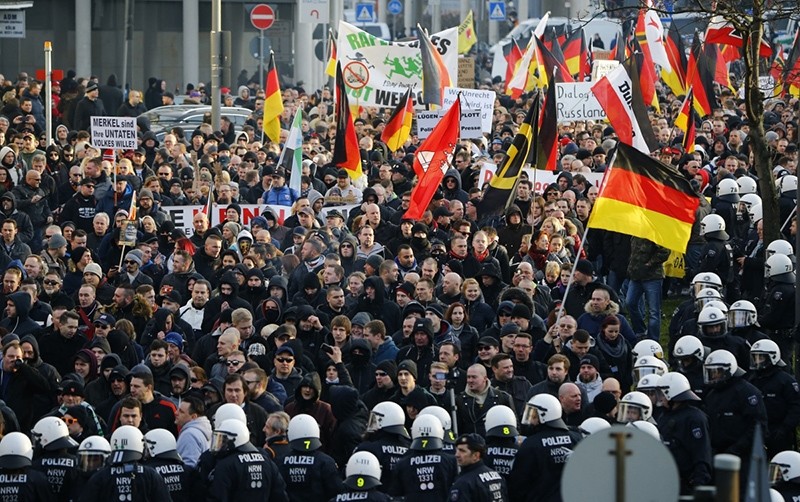 | Reuters Photo
by Nov 16, 2016 12:00 am
Far-right extremists in Germany are increasingly ready to commit violent acts and are now networking with like-minded groups across Europe and in some cases even with the United States, the head of Germany's domestic intelligence agency said.

"This is not just purely a German phenomenon," Hans-Georg Maassen, who heads the Verfassungsschutz, told Reuters in an interview late on Tuesday. "The right-extremist scene is networking on a European level, and in some cases, with connections in the United States."

Maassen said the international connections seen among far-right extremist groups still paled compared with global networking by terrorist groups, but European authorities were cooperating well to keep a close eye on those developments.

Maassen's agency in June reported a sharp rise in far-right violence in 2015, a year in which it took in nearly a million migrants and said it was taking steps to prevent the emergence of more structured "right-wing terrorist" groups.

"We have seen in a series of cases that there are numerous people in the far-right extremist scene who are ready to do anything and who have joined forces to create right-wing terrorist cells," Maassen said.

He said authorities could not exclude the possibility that there were additional groups like the suspected far-right militant group known as "Oldschool Society" that was arrested in 2016.

"We are trying to investigate these cells, if they exist, and to prevent any attacks," he said.

The agency's annual report said the number of far-right violent acts jumped 42 percent to 1,408 in 2015, and the number of arson attacks against refugee centers surged to 75 from just five a year earlier.

Germany was home to an estimated 11,800 violent far-right extremists, the report said, roughly half of the total number of far-right individuals in the country.