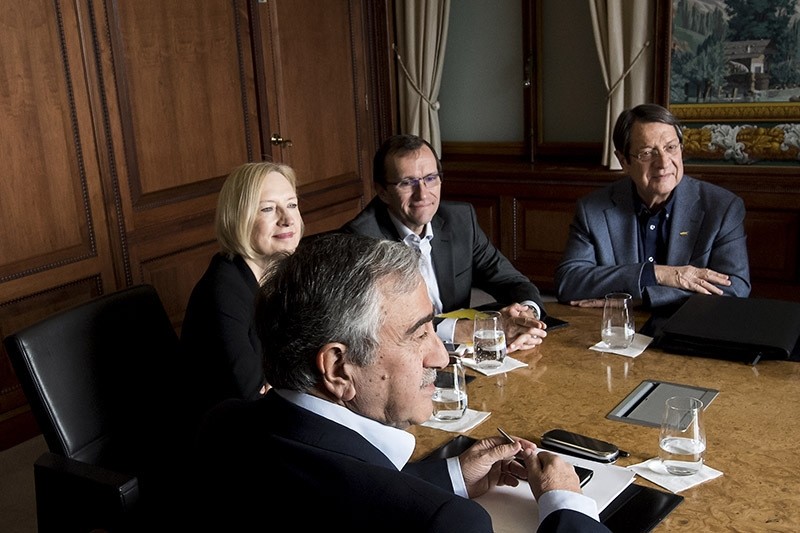 The first day of the second round of UN-mediated peace talks over the Cyprus issue in Switzerland on Sunday failed to outline concrete steps to resolve the dispute, a diplomatic source told Anadolu Agency Monday.

The failure of the Greek Cypriot and the Greek side to take a clear stance on issues to which the guarantor countries, including Turkey, Greece and the U.K. could agree brought the negotiations to a bottleneck, the source, who declined to be named due to restrictions on talking to the media, said.

The two-day negotiation process in the Swiss town of Mont Pelerin was being overseen by the UN's Special Envoy on Cyprus, Espen Barth Eide, in an effort to resolve one of the world's longest-running political dilemmas.

Turkish and Greek Cypriot leaders are trying to reach a final agreement that could see the island reunified after four decades of division during the last round of talks in mid-December, the source said.

During the current round of Swiss talks on Sunday, territorial changes were not discussed; however, guarantees had topped the agenda, the source added.

The second day of round two of the talks will begin later on Monday.

Turkish Republic of Northern Cyprus President Mustafa Akinci and Greek Cypriot leader Nicos Anastasiades had met in Mont Pelerin for the first round earlier this month between Nov. 7 and Nov. 11; they returned on Sunday to tackle the territorial adjustments needed for an anticipated two-state federation, however, the two leaders had declined to shake hands for photographers at the start of their latest talks.

The issue of territory is seen as one of the most intractable on the agenda.

Although the two leaders are said to have come close to agreeing the amount of territory that should be run by the Turkish Cypriot government, there are still disputes over which towns and villages should be included.

If a deal is reached on territorial changes, negotiators are expected to announce a date for a final summit between the Turkish and Greek Cypriot leaders and the three other states involved in the process: Turkey, Greece, and the U.K.