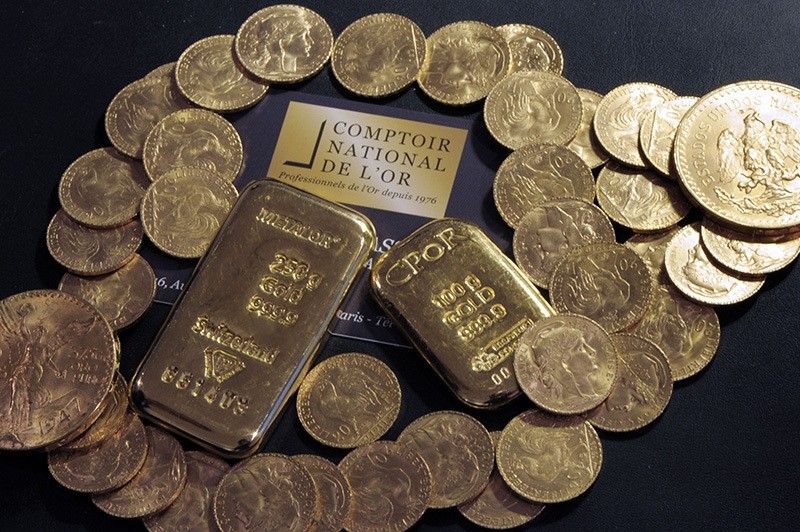 This file photo taken on October 05, 2012 shows Gold bars and coins displayed on a table at the Comptoir National de l'Or, a shop that buys, sales and estimates gold and jewellery in Paris. (AFP Photo)
by French Press Agency - AFP Nov 23, 2016 12:00 am

A Frenchman who inherited a big house from a dead relative got more than he bargained for when he discovered a glittering treasure trove of gold coins and bars worth millions stashed around the place.

Squirrelled away in hiding places throughout the house, he came across thousands of gold coins and bars weighing 100 kilograms (220 pounds) in total.

"There were 5,000 gold pieces, two bars of 12 kilos and 37 ingots of 1 kilo," Nicolas Fierfort, a local auctioneer, told AFP, confirming a report in the local La Depeche newspaper.

Fierfort, who had visited the house to value furniture offered for sale by the new owner, said the loot, which was worth 3.5 million euros ($3.7 million), was "extremely well hidden."

"It was under the furniture, under piles of linen, in the bathroom... everywhere," he said, admitting that he himself had overlooked the gold on his visit.

It was only when the new owner -- whose identity and relationship with the previous owner were withheld -- began moving the furniture that he stumbled on the stash.

First he found a tin box of coins screwed to the underside of a piece of furniture. From there the trail led to a box for a bottle of whisky and other hiding places until he hit the jackpot: a pile of gold bars each weighing 12 kilos.

"At that point he called his solicitor to make an inventory," Fierfort said.

All the certificates of authenticity were later found in the deceased's estate.

The gold has already been sold to various French and international buyers.

But the real winner could be the taxman, La Depeche said.

Apart from being liable for a 45-percent inheritance tax, the finder will also have to pay three years in back taxes on it if the deceased failed to declare his treasures.