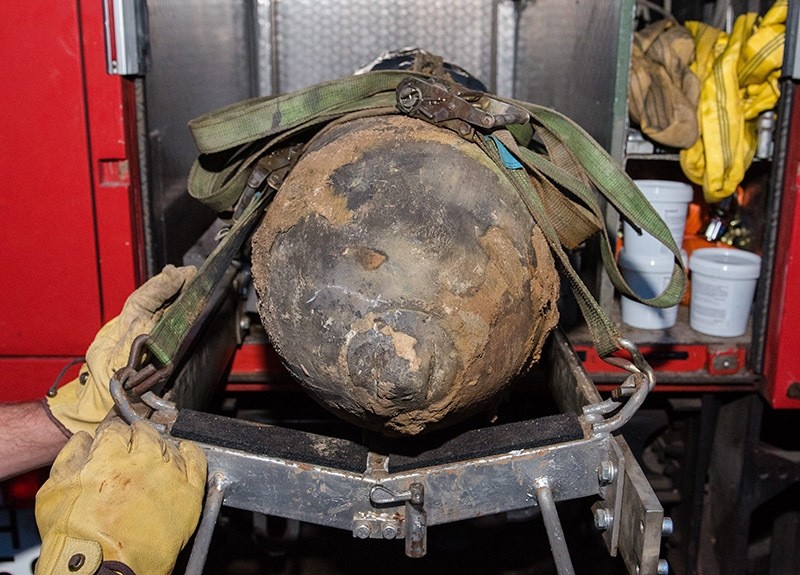 A defused bomb dating back to the Second World War is being loaded onto a lorry in Hamburg. (EPA Photo)
by Daily Sabah with AP Nov 24, 2016 12:00 am

A neighborhood in Berlin has been evacuated after a WWII-era bomb was found during construction work.

The 250-kilogram (550 pound) aerial bomb, described by police as a German bomb with a Russian fuse, has been deemed too unstable to move so is being destroyed in situ in southwestern Berlin.

A kindergarten, several seniors' residences, part of a hospital and many residential homes are within the evacuation area. The nearby German-American John F. Kennedy School, which was closed Thursday for students and staff to celebrate Thanksgiving, was being used as a collection point for evacuated residents with nowhere else to go.

More than 70 years after the end of the war, unexploded bombs are still commonly found in Germany.

According to reports, more than 2,000 tons of unexploded munitions are uncovered on German soil every year. As a result of this the ground must be certified as being clear of any unexploded ordnance, before any construction project can begin in Germany.

In May 2015, for example, around 31,000 residents in the northern German city of Hannover temporarily evacuated their homes after an unexploded World War II bomb was found underneath a former high school.

Experts decided, based upon the bomb's condition, it needed to be immediately defused and removed. About 850 personnel from the fire department, police, relief organizations and explosives experts were reportedly involved in the operation.