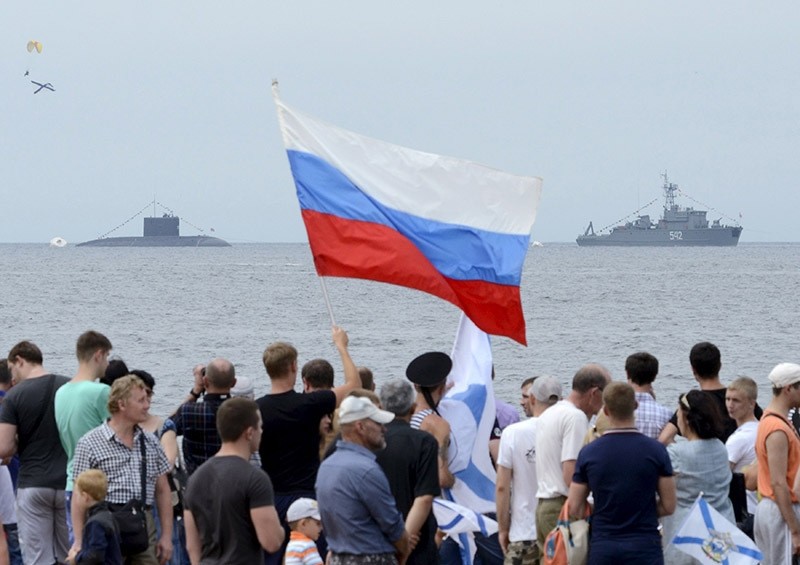 People gather to watch celebrations for Navy Day, with a Russian warship and a submarine seen in the background. July 2015. (Reuters Photo)
by French Press Agency - AFP
Nov 24, 2016 12:00 am

Russia's FSB security service said Thursday it had detained a retired officer in its Black Sea naval fleet based in Crimea on suspicion of passing on military secrets to Kiev.

Leonid Parkhomenko was detained Tuesday in the naval port of Sevastopol on the Russian-annexed peninsula.

FSB said the retired second captain had worked in the Black Sea fleet's headquarters and was still a reservist.

He is being questioned as part of an FSB probe into treason and could face up to 20 years in jail.

Parkhomenko "carried out assignments from Ukraine's defence ministry's central intelligence directorate" and "collected and handed over information that is a state secret about the activities of the Black Sea fleet," the security service said.

Kremlin spokesman Dmitry Peskov told journalists that "Ukraine's provocative and destructive activity in Ukraine is continuing, including in Crimea."

Russian special forces "are doing what they have got to do," he said.

The FSB announcement came after Ukraine said on Monday it had captured two of its soldiers at its frontier with Crimea.

It said the men were former Ukrainian soldiers who had deserted after the 2014 annexation of Crimea and joined the Russian army. They could face up to 15 years in jail.

Moscow in turn accused Kiev of unlawfully abducting the men from Russian soil.

The FSB earlier this month announced the arrest of a group of suspects whom it accused of planning acts of sabotage in Crimea on the orders of the Ukrainian defence ministry.

Earlier this year, the FSB also claimed it had foiled "terrorist attacks" in Crimea.

Ukrainian President Petro Poroshenko has dismissed the accusations of plotting attacks on Crimea as "fantasies" concocted by Moscow.