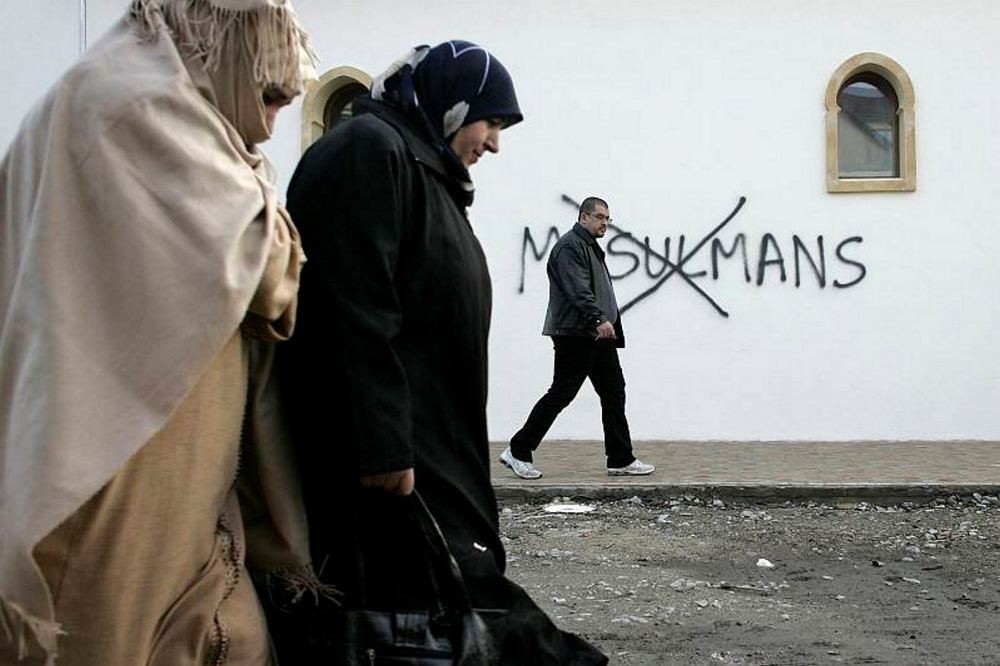 Muslim residents walk past racial slurs painted on the walls of a mosque in the town of Saint-Etienne, central France.
by Yusuf Selman İnanç Nov 25, 2016 12:00 am

Turks living in France, which offers PKK and FETÖ members a safe haven, are worried as Islamophobia has been normalized and the state is attempting to fully control Islam and Muslims under the pretext of preserving secularism

The Charlie Hebdo cartoonist killings and the attacks in Paris and Nice have led to an unprecedented rise of Islamophobia in France. Although French society has never been very tolerant of Muslims or foreigners, the latest situation affects Muslims' daily lives. Several police reports show that Muslims, especially women, have been attacked in the streets. Many Muslims were not given jobs and many others have been accused of being terrorists. With the latest attacks turning Islamophobia into a middle ground for the right and left movements, the socialist party has also started blaming all Muslims for the incidents. Moreover, there are other problems facing Turks as France has been a staunch opponent of Turkey in its fight against terror. Unlike Germany or the U.K., France has supported cutting ties with Turkey during its European Union process. The Gülenist Terror Group (FETÖ) and PKK members enjoy a large tolerance in France, and the French government insists on considering the terror organizations opposition parties.

France, which has promoted liberal values throughout its history, seems to be suffering from a lack of comprehensive understanding of the new world order. Therefore, "In order to grasp the impact of Islamophobia, one has to gauge the extent of the cultural crisis that France is going through in the era of globalization and postmodernity. This crisis runs deep considering French culture was built on values promoting unity," wrote Nicolas Lebourg for Centre d'Etudes Politiques de l'Europe Latin in 2015.

"For parts of French society, this globalized world, where any unitary framework fades away and those who are not on the move seem to be disqualified, represents insecurity. This dynamic has contributed to the spread of the Arab-Muslim social fiction where, as a group, they are seen as a unified body: socially, culturally and religiously. This crystallization of an 'us,' composed of separate individuals in competition with each other, and a 'them,' imagined as united, has replaced the critique of the influence of economic and technical transformations on our way of life by a critique of the Arab-Muslim World," he continued.

Nick Riemer, in his article entitled Roots of Islamophobia in France said: "The French state has excluded and exploited Muslims for decades. The intensity of this assault varies, but the attacks in Paris in January and November of last year, and in Nice and Rouen in 2016, have sent into a feverous pitch. Of the 3,500 raids conducted since the start of that period, only six have led to investigations. Authorities admitted that they were targeting Muslims on a purely 'preventive' basis, without any specific evidence against them. Children have watched as their parents are handcuffed or dragged from their beds by heavily armed police. In the first three months of the state of emergency, enacted after last year's Bataclan attack, 274 people were placed under house arrest, the vast majority of them Muslims. Racial profiling is rampant."

Kürşad Arıkan, a French-born Turkish PhD student said: "Islamophobia is a fact of French society. In the last decade, anti-Islam sentiments have increased and become a normal thing in political discourse. This is very dangerous. Even the leftist politicians are expressing their anti-Islam ideas explicitly. This affects the society. Veiled women or bearded men are attacked in the streets." Arıkan's family moved to France in the 1960s and believes his family did not face discrimination directly at that time, but after 9/11 and the emergence of Daesh, Islamophobia greatly increased. He added that the more societal or economic problems France faces, the more Islamophobic attacks will occur in the media, as well as the trend of prominent politicians blaming Muslims and migrants for the deterioration of economy. He feels that French people are also victims being manipulated by the media. Arıkan believes that France is very disappointed with the failed coup attempt on July 15, as Turkish President Recep Tayyip Erdoğan is hated by the media and French politicians. "During my daily relations with French people, I always hear their comments on Turkey, like there is dictatorship and there is no freedom of speech. They believe lies and defamations." Speaking on the condition of anonymity, a student who has been studying literature in France since 2012, said: "If you want to be successful here, you have to tell them what they want to hear about Turkey. You have to feed the Turkish image they have in their minds." He also complains about people's reactions to Turkey. He believes people's knowledge on Turkey is very limited, but they constantly accuse the country because of its struggle against the PKK and FETÖ. An engineer working for an international company in Paris also said: "French people know nothing about Turkey. They have stereotypes in their minds and they just believe what the media shows them."

France will also cancel a 1978 agreement that allows Turkey to send imams and teachers for the Turkish community. Imams will be under full control of the French state even though churches are independent. Turkish children will be deprived of having Turkish lessons. France also will establish a center that will observe "secularism" in civil institutions, which seems to have become a mask for state control. For instance, Muslim students have been forced to have lunch at schools, but schools have been banned from cooking pork-free meals for Muslims. Many Muslims in France accuse the state of attempting to be in control of religion which contradicts with its secular structure.