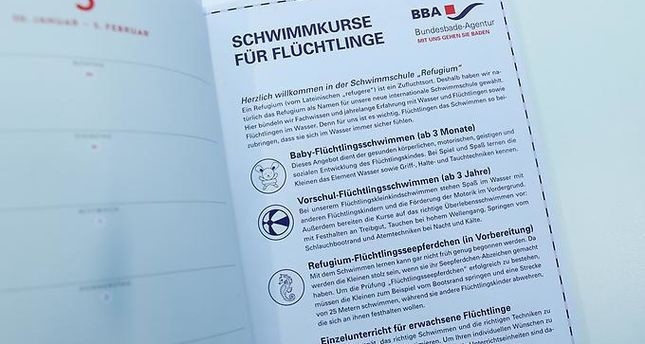 As an inhumane and degrading treatment of refugees, Germany was shaken by a satirical almanac mocking refugees distributed at a German press ball. A satire about swimming courses for refugees in the Mediterranean was handed out at the Federal Press Ball in Berlin last Friday, to the dismay of the ball guests, who found it cynical and inhumane.

In a written statement, the board said they regret hurting feelings and values. In the "Almanac" for the Federal Press Ball, a "Federal Swimming Agency" offers a "preschool-refugee swimming course (from three years)", with contents like "hold fast, diving with high waves, jumping from the edge of an inflatable boat and breathing techniques at night and cold." The map reportedly showed the Mediterranean as a swimming school.

Robert Rossmann, a correspondent of the "Süddeutsche Zeitung," described the brochure as "inhuman." Green Party Federal Chairwoman Simone Peter wrote: "So much cynicism and inhumanity leaves you speechless."

According to the statement of the Federal Press Conference, the contribution had been "controversially discussed in advance."

"It was the intention of the authors to draw attention to the catastrophe leaving thousands of dead in the Mediterranean and to stimulate debate on migrant trafficking. In an editorial final vote, it was decided by a majority that this contribution tests the boundaries of the satire but does not exaggerate it," the statement said. The annual satire "Almanac" has been published since 1951.

The first statement was made by journalist Jens Peter Paul on Wednesday night. "In fact, the piece is quite bitter and evil, it is offensive, it has been the object of several intense discussions, I absolutely do not like it, and it is not even funny, but surprise it doesn't have to be."

This year's almanac is supposedly a reaction to the German-Turkish refugee deal and the massive death of people in the Mediterranean.

Hostility to asylum seekers has been on the rise across the country. Most of the hostility targets young male asylum-seekers from Syria, Iraq and Afghanistan, who make up the majority of the migrants reshaping Germany. The number of crimes against asylum-seeker accommodation in Germany was almost a third higher in the first 10 months of 2016 than in the same period last year, according to data released on Nov. 5, despite a drop in the number of refugee arrivals.

Between January and October, 832 crimes against asylum-seeker accommodation were recorded, the Federal Crime Office (BKA) told the Neuen Osnabruecker newspaper in response to an information request. A total of 637 crimes were recorded in the same period last year. However, the statistics showed a downward trend as the number of attacks has dropped off since the beginning of the year. Should the trend of recent months continue, the total for 2016 is expected to be less than the 1,031 recorded in 2015. The vast majority of the crimes was committed by far-right extremists (772) and most was cases of property damage (330). Germany expects to receive fewer than 300,000 migrants this year, the Federal Office for Migration and Refugees (BAMF) said.

German society has been polarized by the influx of some 890,000 asylum seekers last year with another 213,000 applying in the first nine months of 2016. Although many fewer migrants have entered the country in 2016, parties on the far right have called for an immigration cap.

Violent crimes against migrants and arson attacks on asylum shelters and mosques have increased in frequency, and refugees say they have experienced discrimination and abuse since the Cologne attacks. The anti-foreigner sentiment is reshaping German politics as well, with the populist Alternative for Germany (AfD) party surging as it campaigns against Chancellor Angela Merkel's decision to welcome the migrants.

The two Christian parties – known as the "Union" in Germany - have come under increasing electoral pressure from the populist, ant-immigrant AfD party. The CDU-CSU alliance, which dates back to the immediate post-war period, has for the first time come under serious pressure from the right of the political spectrum. The AfD is polling close to 15 percent countrywide and well above that in eastern states, where the anti-immigrant feeling is strongest.