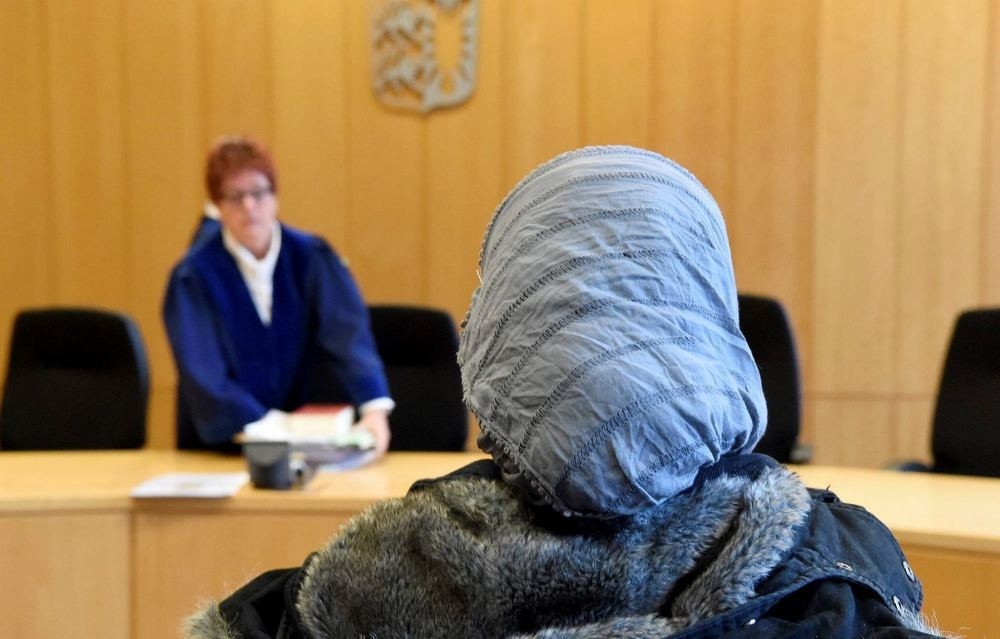 A Syrian refugee during an appeal hearing in a hearing room at the Higher Administrative Court (OVG) in Schleswig, Germany, Nov. 23.
by Compiled from Wire Services Dec 03, 2016 12:00 am

As the number of asylum seekers in Germany have increased rapidly, international human rights bodies argued that the law has been violated by German authorities who assess asylum applications

In a joint statement issued by German non-governmental organizations noted that the asylum applications in Germany were not fully implemented by the state-of-the-law mechanisms. The declaration issued by a large number of human rights and humanitarian organizations, including Amnesty International, Pro Asyl and Caritas draws attention to the lack of legal safeguards, bad interpreters and superficial treatment of authorities' applications.

The Federal Office for Migration and Refugees (BAMF) does not accept these criticisms stating that NGOs' explanations are based on 106 adversely selected applicants from hundreds of thousands of files. The institution also argued that the asylum application process cannot be judged on the basis of these examples.

Germany, trying to staunch the flow of Syrian refugees, has placed high hurdles for them to be reunited with their families, creating a Kafkaesque nightmare in the courts.

As the country enters a decisive election year with anti-migrant populists on the rise, the mass arrival of refugees' wives and children would have created a major challenge for Chancellor Angela Merkel as she seeks a fourth term.

Merkel's popularity plunged after the arrival of nearly 900,000 asylum seekers from the world's crisis zones last year, but has recovered of late as arrivals have fallen.

However for a rising number of the newcomers themselves, many of them men who arrived without their families, the situation is untenable. Critics slam the restrictions as "inhumane".

Since the start of the year, 32,551 refugees -- the overwhelming majority of them Syrians (28,444) -- have filed legal complaints to gain recognition as refugees under the definition set out by the 1951 Geneva Conventions. Those rules specifically include a right to family reunification.

However the authorities charged with according asylum in Germany, the BAMF, as a rule now offer only "subsidiary protection" to Syrians fleeing a civil war that has ravaged their country for more than five years.

This lower-tier status only provides a temporary residence permit good for one year and subject to renewal, and bars the application for family members to be allowed entry to Germany until March 2018. The process itself can take another two years.

Walid, a 41-year-old cook from Damascus, has given up hope of seeing his wife and six children, whom he left in Turkey en route to Berlin, anytime soon.

"I'd be willing to go back to Turkey to be near my children but I'm not even allowed to do that because I have a Syrian passport and you need a visa to go to Turkey," he said, declining to provide his full name.

German refugee rights group Pro Asyl slammed the policy for the burden it placed on applicants.

"You have to assume you'll be separated for four to five years. That is an incredibly inhumane hardship for the people affected and their families, who are exposed to war," it said.

"There is clearly a political motivation" behind offering only subsidiary protection to most asylum seekers, Hamburg-based attorney Tobias Behnke said. "I think the idea is to make Germany less attractive for refugees."

In 2015, at the height of the influx, the vast majority of Syrian applicants -- about 96 percent -- automatically received full refugee status without even having to undergo an interview at the BAMF. But from this year, the office has insisted on determining whether applicants personally underwent persecution in Syria to determine their status.

The leftist opposition has protested against the change but Merkel's right-left coalition government insists that the BAMF sets its policies independently.

As a result, about one third of the 100,000 Syrians granted only limited protection have turned to the German justice system since January, forcing courts to take on more personnel to manage the caseload. Most of the time, the legal battle has proved worth it for refugees.

According to BAMF figures, three quarters of the 3,490 cases already heard have been decided in favour of the Syrians, with judges accepting their argument that they risked persecution by the Bashar al-Assad regime for having fled.

However a higher court last month issued a ruling dismissing the risk, upholding the BAMF's policy of delaying family reunification. "The higher you go with the appeals, the more political the justice system becomes," charged Bernd Mesovic of Pro Asyl.
RELATED TOPICS