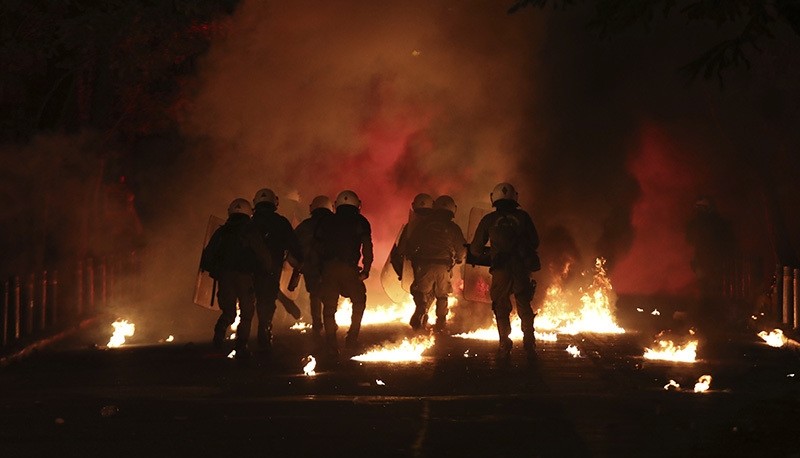 Riot police try to avoid petrol bombs and flares thrown by protesters during clashes in Athens, on Tuesday, Dec. 6, 2016 (AP Photo)
by Dec 06, 2016 12:00 am
Demonstrations in Greece to mark the eighth anniversary of a teenager's death at the hands of police culminated in violence Tuesday, with officers using tear gas against protesters.

Hooded youths set fire to cars and threw stones and firebombs at police in the Exarcheia district, where 15-year-old Alexis Grigoropoulos was fatally shot by a police patrolman in 2008.

Hundreds of school pupils, university students and left-wing organisations had earlier held protests in memory of Grigoropoulos, whose death sparked days of youth unrest across Greece.

Greek police had already been on alert for the remembrance day, mobilising thousands of officers and shutting down two central metro stations closest to the protest.

The officer who shot Grigoropoulos following a street row, Epaminondas Korkoneas, was in 2010 found guilty of culpable homicide and sentenced to life in prison for the killing.

At his trial, Korkoneas claimed he had fired warning shots to keep back youngsters who were hurling objects at him and his patrol partner.

One of his bullets deflected onto the boy's chest, killing him before he could be taken to hospital.

His patrol partner Vassilios Saraliotis was sentenced to 10 years for complicity but was conditionally freed in 2011.