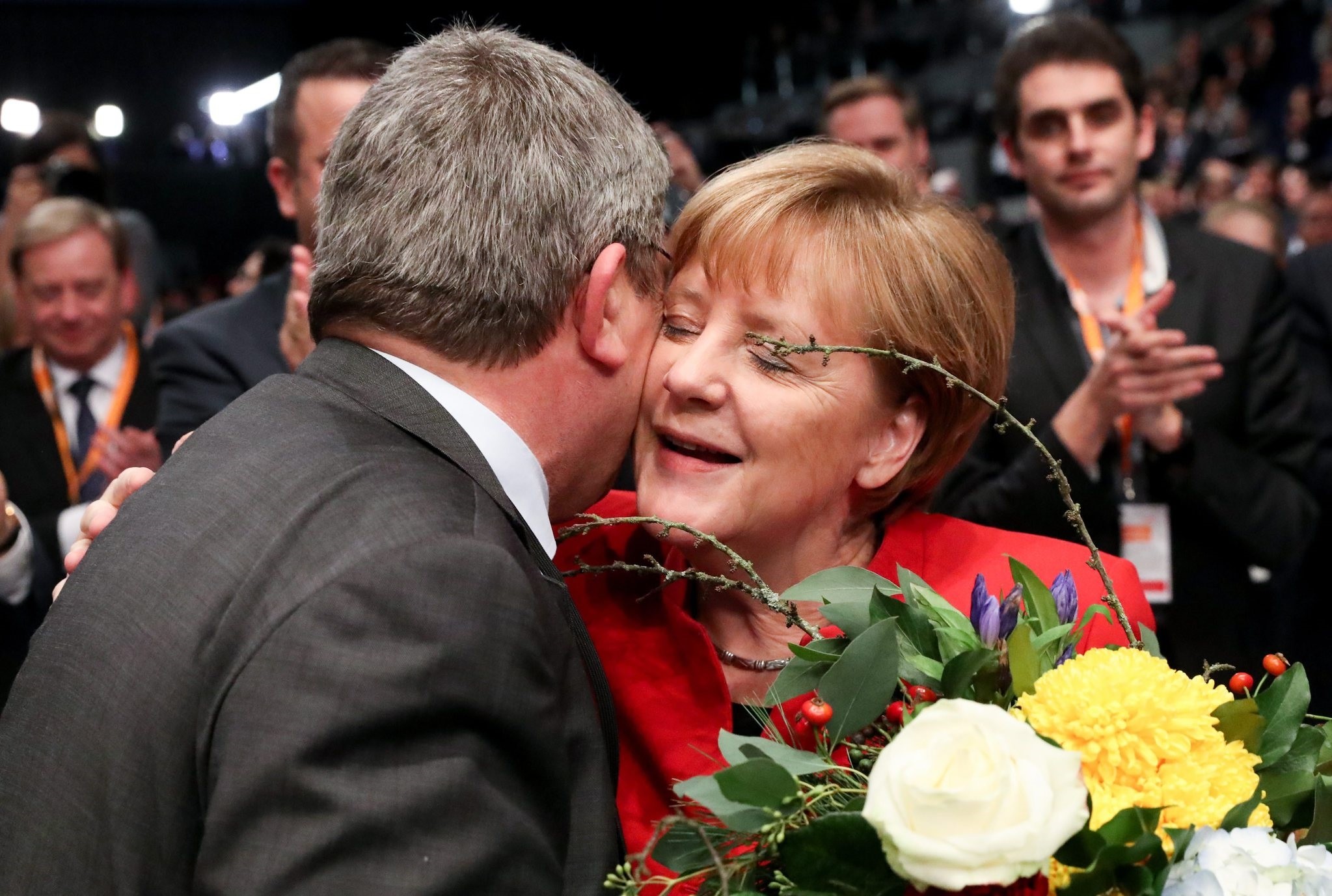 German Chancellor Angela Merkel won re-election as chairwoman of her Christian Democrats (CDU) on Tuesday with 89.5 percent of votes cast by just under 1,000 party delegates, giving her a boost as she seeks a fourth term in office next year.

The endorsement fell short of the 96.7 percent Merkel won when she was last re-elected two years ago. Her decision last year to open Germany's doors to some 1 million migrants sapped some grassroots support and has dented the CDU's poll ratings.

The vote came after a speech in which she struck a decidedly conservative note, telling members that she wants to stem the influx of migrants and ban face-covering veils where possible.

Germany saw about 890,000 asylum-seekers arrive last year. Many came after Merkel decided in September 2015 to let in migrants who were stuck in Hungary. The numbers have since declined sharply, but Merkel's "we will cope" approach to the migrant crisis has provoked discord within the CDU, which has seen a string of poor state election results this year.

"A situation like the one in the late summer of 2015 cannot, should not and must not be repeated," Merkel told delegates.

While Merkel insists that Germany will continue to take in people who genuinely need of protection, her government has moved to toughen asylum rules and declare several countries "safe" — meaning people from there can't expect to get refuge.

Merkel was also a driving force behind an agreement between the European Union and Turkey in March to stem the flow of migrants.

Polls show a solid lead for the conservatives, although their support is still short of the 41.5 percent they won in Germany's 2013 election. They face new competition from the upstart nationalist Alternative for Germany party, which has thrived by attacking Merkel's migrant policies.

"The 2017 election will be more difficult than any election before, at least since German reunification," Merkel said, citing the "strong polarization of our society."

Merkel told delegates that "parallel societies" won't be tolerated and advocated banning the wearing of full-face veils used by some Muslim women where that's possible. But she also hit out at anti-migrant and anti-government protesters who chant "We are the people!" or post hate messages on social media.

"Who the people are ... is something that we will all determine, not just a few, however loud they may be," she declared.

The EU's longest-serving head of government has often said her aim is for Europe to emerge stronger from crises such as the debt troubles that afflicted the common euro currency.

Merkel said she still believes in that — but "we must in this situation ... first do everything so that Europe doesn't emerge even weaker from the crises than when it went in."

That "sounds modest, but let's not deceive ourselves, it is not," Merkel said, citing conservative icon and ex-Chancellor Helmut Kohl's maxim that European stability shouldn't be taken for granted.

Aside from unhappiness about her migrant policy, some party members are grumbling about what's perceived as a drift to the left during her 11 years as chancellor.

"We have thrown a lot of Christian Democratic principles overboard," said Eugen Abler, a delegate from the southwestern state of Baden-Wuerttemberg, whose complaints included what he called "the downplaying of Islamization."

"The result: We are winning few voters on the left and we are losing a lot on the right," he added.

Still, she stressed Tuesday that the conservatives will rule out tax increases for the next four years.