EU member states to send migrants back to Greece 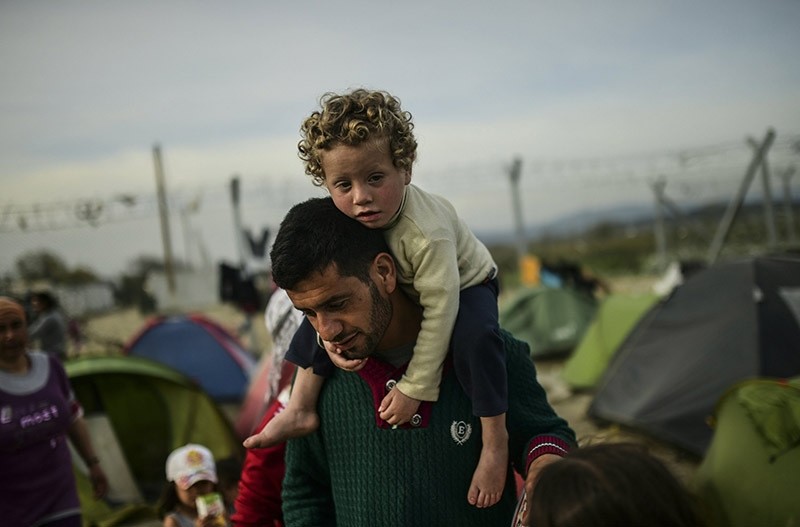 A man carries a child as migrants and refugees carry on with their daily lives at the makeshift camp along the Greek-Macedonian border, on April 1 2016. (AFP Photo)
by Dec 08, 2016 12:00 am

The EU recommended Thursday that member states resume sending asylum seekers back to Greece from March next year, after transfers were halted for five years because of poor conditions there.

Brussels said it was a key step towards restoring the European Union's migration policies and the passport-free Schengen zone, which nearly collapsed under the pressure of the 2015 migrant crisis.

But rights group Amnesty International said it was "outrageously hypocritical" to put pressure on Greece when it had borne the lion's share of the more than one million migrants who have flooded into the EU.

"We are recommending the gradual resumption of Dublin transfers of asylum seekers starting next year" from March 15, EU Migration Commissioner Dimitris Avramopoulos told a press conference.

Avramopoulos said Athens had made "significant progress" in improving conditions for asylum seekers in line with 2011 court rulings, which had suspended transfers because of "degrading" conditions at time in Greece.

The commissioner, who is Greek, insisted there would be a "very small number of people" going back to Greece as a result of the change announced Thursday.

Only people who move countries from Greece after March 15 will be affected, while unaccompanied minors and vulnerable people will be excluded, he added.

Greece and Italy have been the first point of entry for most of the more than one million migrants who have entered the bloc since 2015 fleeing war and poverty in the Middle East and Africa.

Under the EU's Dublin asylum rules, the country where a migrant first lands must first process their asylum request, and must also take them back if they travel to other countries in the 28-nation bloc.

But many of those who landed in Greece moved on to richer northern countries like Germany, especially after Chancellor Angela Merkel opened the door to all Syrian refugees.

In turn, that huge pressure on transit countries, leading to many to bring back border controls and effectively suspending free movement in the Schengen area.

Merkel led calls to overhaul what she called the "obsolete" asylum system, and Brussels has since pushed all EU countries to share the migrant burden, while sending aid to Greece.

But there has been heavy opposition from Eastern Europe and a scheme to relocate 160,000 refugees from Greece and Italy around the bloc has moved at a snail's pace with only 8,162 having moved so far.

Greece is however benefiting from an deal with EU membership-candidate Turkey which has drastically cut the number of refugees and migrants making the dangerous sea crossing to the Greek islands.

Crossing have dropped to 90 a day from 1,740 before the March 20 EU-Turkey deal, the European Commission said.

Under the deal, 748 people, including 95 Syrians, have been returned from Greece to Turkey since March 20, while 2,761 Syrian refugees have been resettled from Turkey to Europe.

Amnesty's Iverna McGowan slammed the commission for implying that Greece alone is to blame for the poor conditions.

"It seems that for the European Commission all roads for refugees lead to Greece," McGowan said in statement.

"It is outrageously hypocritical of the European Commission to insinuate that Greece alone is to blame for dire conditions, when the overcrowding and insecure climate on the Greek islands are for the most part caused by the EU-Turkey deal," she said.

The conditions -- including overcrowding, freezing temperatures and violence -- were compounded by a "lack of solidarity from other EU countries to relocate people", she added.