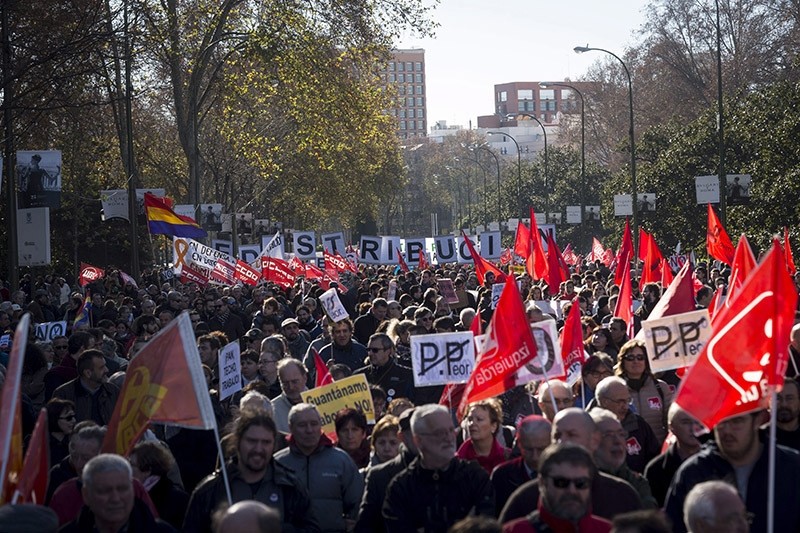 Several thousand workers took to the streets of Madrid Sunday to protest the Spanish government's labor policies of recent years as the country emerges from a long economic downturn.

Spain's two main labor unions, UGT and CCOO, organized the march in the capital under the theme "People and their rights first." The march follows more than 60 smaller protests held by unions in recent days across the country.

Unions claim that the cuts to public spending and labor reforms carried out by Spain's conservative government to deal with the country's five-year economic crisis hurt workers' rights and their purchasing power.

The march was backed by leaders of Spain's Socialists and far-left Podemos (We Can) parties.

The conservative-led government of Prime Minister Mariano Rajoy overhauled Spain's labor laws in 2012 to make it cheaper for companies to fire workers.

Spain's slowdown began to ease in 2013. Steady job growth has brought the unemployment rate down from 27 percent in 2013 to under 20 percent, yet that is still the second highest percentage of the 28 European Union member states.

Rajoy's government now rules in minority following recent elections. Its most pressing task is finding support in parliament to pass a budget that meets the EU's deficit targets.

CCOO leader Ignacio Fernandez Toxo said that after years of trying to limit the government's reforms, unions want to go on the offensive.

"It's a key moment. Now is when the policies that will mark the budget for next year are being decided," Fernandez Toxo said.

Spanish Labor Minister Fatima Banez said that the unions should negotiate with the government instead of marching.

"If the unions want a change, then they should agree to one with employers and we will consider it," Banez told Cope radio.