Syrian refugee hailed as 'hero of the day' after returning €50,000 to German woman 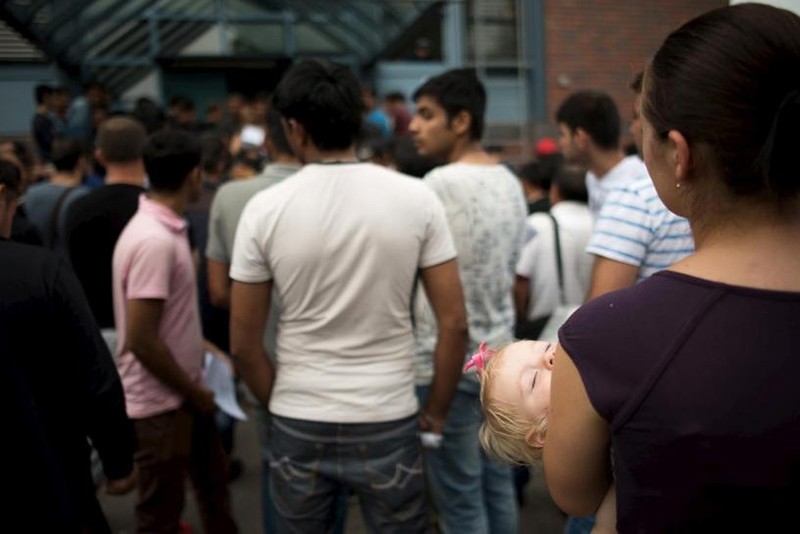 Asylum seekers wait in front of the Federal Office for Migration and Refugees (Reuters File Photo)
by Dec 19, 2016 12:00 am
While settling in to life in Germany as a refugee, Muhannad Musa discovered a hidden stash of 50,000 euros ($52,163 US) in cash and three savings account books. The Syrian handed it over to the police to find the rightful owner. He tells dpa it was a decision that changed his life.

Something resembling calm had returned to Muhannad Musa's life after his traumatic experiences in Syria.

It was last June, and the flight from his war-ravaged country was behind him. After bidding farewell to his parents and three younger brothers, he made his perilous escape in an inflatable raft across the Mediterranean, then overland through the Balkans and many other emergency way-stations before finally reaching Germany.

Safe at last and his refugee status officially recognized, Musa began to build a new life in the north-western town of Minden. With the little money he had, he scoured second-hand shops to try to furnish his new flat, and it was at a market that he bought an old wardrobe.

As he was reassembling the wardrobe, he noticed that the bottom appeared to have a double layer, and sticking out of it was a bit of paper. Examining it more closely, he found an envelope - and inside it were 50,000 euros in cash and three savings account books showing funds of more than twice that amount.

"The notes were so new and smooth that I just thought they were counterfeit," Muhannad, speaking through an interpreter, told dpa. He recalls doing some research online before he realized that the treasure was genuine.

"To be truthful, the first thing I thought about was my brothers," he admits. They are over 20 years old, an age when they could soon be drafted into military service for Syria.

For Musa, the oldest son in the family, that was what had driven him to flee 14 months earlier. "In war you either have to shoot at others, or you will be shot."

To get his brothers out of Syria, he would need money. And all of a sudden, there it was. What should he do? He talked to his brothers, confided in a friend, asked a Muslim cleric for advice, searched the Quran for answers.

"It quickly became clear to me: My religion says that you can't keep strangers' money; you have to return it," he said. "It's all about treating your fellow humans well and to help them. And everyone who has lost something would really like to see it again."

Musa took the envelope to the local immigration office. There, a surprised office worker immediately accompanied him to a police station next door. Officials there were equally shocked.

"In 40 years here I have experienced nothing like this," said chief inspector Ulrich Egen, who had received the envelope, along with a colleague. "We counted the money three times over. We just couldn't believe it."

It is fairly commonplace that people will turn over smaller sums to the police, Egen noted. "But such an amount like this? Incredible."

The police inspector says Musa's actions were exemplary behaviour "and it makes no difference if it is a refugee or someone else."

At a press conference, the Minden police celebrated Muhannad Musa as the "hero of the day" and the story quickly spread around Germany.

The name on the savings account books led quickly to the original owner of the fortune, once police had determined that the money was not itself illegally acquired. As it turned out, the owner had simply forgotten about her crafty hiding place in the cupboard.

Later on, the Syrian refugee met with the family to whom the money belonged. "The woman was crying, she was so grateful," Musa said.

Regarding the finder's fee as mandated under German law, he and the family came up with an alternate solution. The family paid the not inconsiderable costs for Musa to acquire a driver's license. Had they paid him his reward in cash, the money would have been added up against his refugee benefits.

Today, Musa happily talks about his story, especially at a time when attitudes in Germany towards refugees are not always positive. His example serves as a counter to negative images, such as those from last New Year's Eve in Cologne, when crowds of mainly North African and Arab men encircled and assaulted women.

Musa says he wanted to show that Islam, which guides his behaviour, is a religion of peace - and that it has nothing to do with the terrorism of the so-called Islamic State.

He says many compatriots are grateful to him, while many Germans have shown him respect.

"But there are also always those people who insinuate something evil, no matter what you do," Musa says. Right-wing elements in Germany used social media to challenge his story, while some acquaintances even accused him of seeking publicity.

He shrugs his shoulders: "I have never regretted making my decision," Even though his biggest worry is still about his brothers back in Syria, "I would still do the same thing."
Last Update: Dec 19, 2016 4:12 pm
RELATED TOPICS