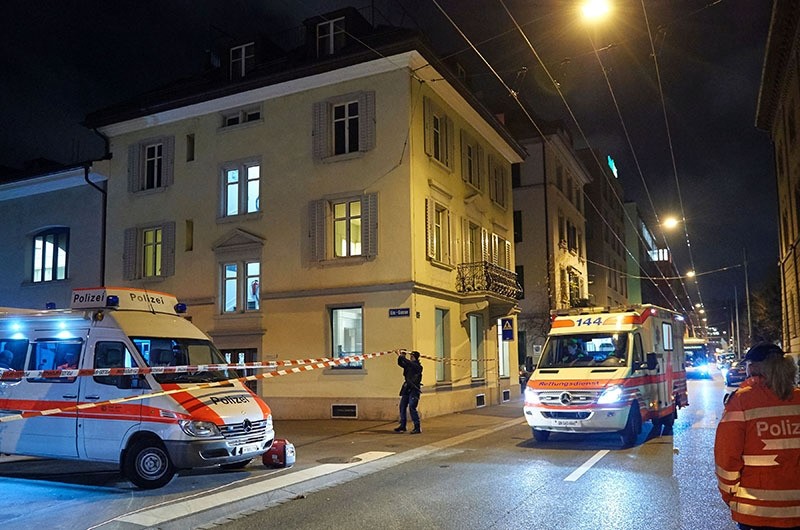 Ambulance and police cars are seen outside a Muslim prayer hall, central Zurich, on December 19, 2016, after three people were injured by gunfire. (AFP Photo)
by Compiled from Wire Services Dec 20, 2016 12:00 am

The man who opened fire in a Zurich mosque and then took his life had earlier killed an acquaintance with a knife before beginning the shooting spree, investigators said Tuesday.

"There are no indications that terrorism was involved," prosecutor Francoise Stadelmann said about the 24-year-old Swiss suspect who was apparently interested in the occult.

However, investigators said they did not know the motives for the stabbing at the weekend or for the shooting that left three injured on Monday.

A passer-by had discovered a young dead man with stab wounds at a Zurich playground on Sunday.

The suspect had left DNA traces, and investigators quickly identified him as an acquaintence of the victim, said Christiane Lentjes Meili, Zurich's criminal police chief.

The two men who were about the same age had an argument prior to the killing, she said.

When police searched the suspect's empty home on Monday, they found knives and symbols that pointed to the occultist interests of the man, who was partly of Ghanaian descent.

"There were indications that the perpetrator was interested in occult topics," Lentjes Meili said.

Lentjes Meili also stated that the man had a legal permit for the gun he used in the shooting, and that it remained unclear if he was suffering from mental problems.

On Monday evening, the man entered a small mosque in central Zurich and shot at a handful of men who were drinking tea after praying.

Three men were injured, two of them seriously.

Shortly afterwards, a body was found a few hundred metres (yards) from the scene on a river bank under a bridge.

Lentjes Meili confirmed Tuesday that the body belonged to the shooter, and that he appeared to have turned his gun on himself after his rampage.

The mosque is mostly visited by Muslims from Somalia. It also serves as a meeting place for the Somali community in Zurich, which includes many asylum seekers.

Bashir Gobdon, the founder of a Somali expatriate club in Switzerland, said his community was deeply unsettled by the shooting.