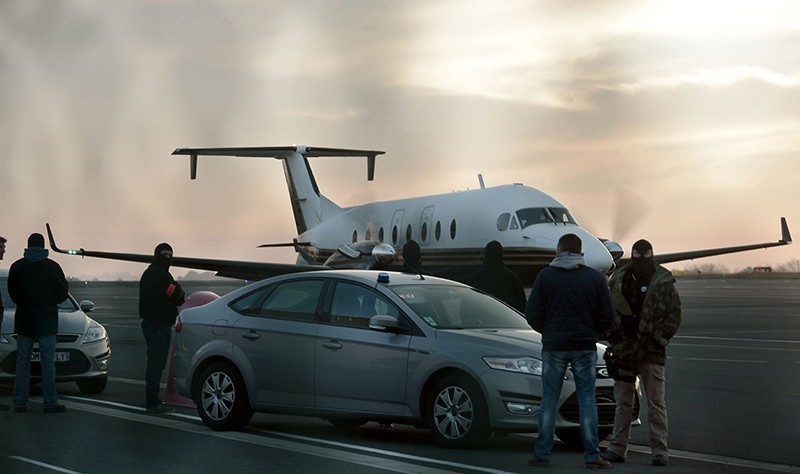 French policemen stand at Biarritz airport, southwestern France on December 19, 2016 during the transfer to Paris of five people arrested on December 16 (AFP Photo)
by Dec 21, 2016 12:00 am

Five people were arrested and arms seized in a police raid which France and Spain claimed dealt a "blow" to Spanish Basque separatists ETA, but which rights groups slammed Saturday as a "political" operation.

French and Spanish officers staged the raid late Friday near Bayonne in southwest France, and those detained are to be transferred to Paris, where anti-terrorism prosecutors will lead the probe, said sources close to the case.

During the operation "a large haul of arms, explosives and ammunition" was seized, said the French interior ministry.

But it subsequently emerged that those arrested included the head of an ecologist group, a former head of the Basque Country chamber of agriculture, and a female journalist.

The head of French rights group the Ligue des Droits de l'Homme (LDH), Michel Tubiana, said he had initially planned to be among those present but did not go, and condemned the raid.

He said the aim of the activists was to destroy ETA arms, and to hand them over to authorities.

Founded in 1959, ETA waged a violent decades-long campaign for an independent Basque homeland in northern Spain and southwestern France, and is blamed for the deaths of more than 800 people.

It declared a ceasefire in October 2011 but has refused to give up its weapons.

"We didn't hide, our plans were clear from the start," Tubiana told AFP. "There is a total blockage in the ETA disarmament process, a blockage which comes from the French and Spanish governments' side.

"Several civil society members wanted to relaunch the process, by carrying out a first destruction of weapons," he said, adding: "This police operation is clearly political."

French Interior Minister Bruno Le Roux said Saturday that "nobody has the right to proclaim themselves a destroyer of arms.

He added that for Paris and Madrid, the operation was "a new hard blow for ETA," while Spain's interior ministry said its police had "dealt a blow to the arsenal of the ETA terrorist group in France".

ETA is seeking to negotiate its dissolution in exchange for amnesties or improved prison conditions for the roughly 350 ETA members held in both countries.