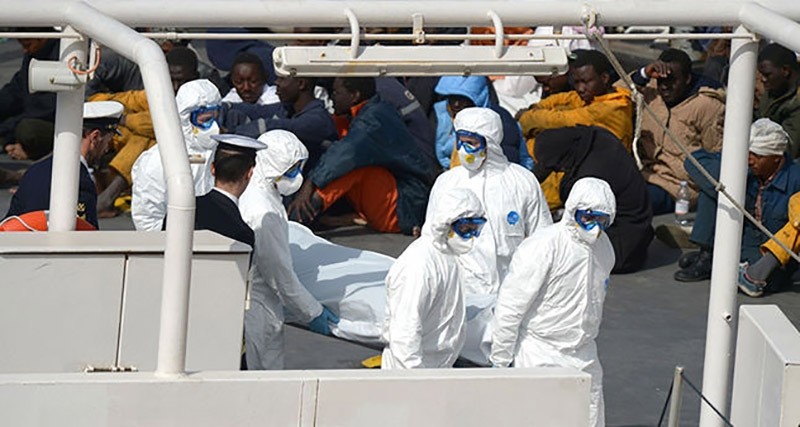 This file photo taken on April 20, 2015 shows rescued migrants watching as the body of a person who died after a fishing boat carrying migrants capsized off the Libyan coast (AFP Photo)
by Compiled from Wire Services Dec 21, 2016 12:00 am

Rescuers saved around 300 migrants from rubber and wooden boats in the Mediterranean on Wednesday but recovered six dead bodies during the operations, the Italian coastguard said.

Coastguard and naval ships as well as two privately owned tugs rescued the people from four boats in the central Mediterranean, the coastguard said in a statement.

It gave no details on the nationalities of those saved or those who died.

The rescued people and the corpses will be taken to ports in southern Italy which have registered nearly 180,000 such arrivals so far this year.

The record numbers of migrants have mostly come from Africa but also include significant numbers from the Middle East and South Asia.

According to the UN, at least 4,700 people have died this year attempting the often perilous crossing from Libya on boats chartered by people smugglers who frequently abandon their human cargo soon after the departure.