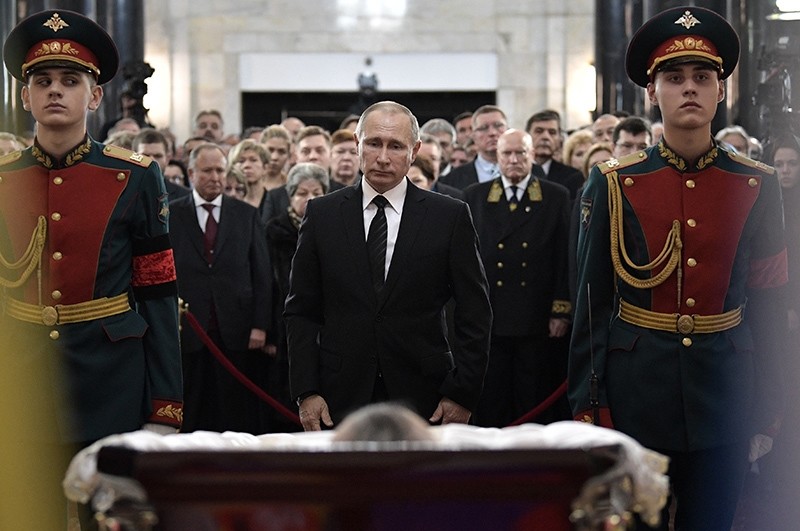 Russian President Vladimir Putin on Thursday bade farewell to Andrey Karlov at a packed memorial ceremony in Moscow for the diplomat who was assassinated while attending an exhibition at an art gallery in Ankara.

Dozens of colleagues and relatives attended the ceremony for Karlov, the ambassador to Turkey whose death was labelled by Moscow as an act of terror while President Recep Tayyip Erdoğan said the perpetrator was a member of the Gülenist Terror Group (FETÖ) which was behind the deadly July 15 failed coup attempt.

Putin laid red roses at the foot of Karlov's coffin and spoke with his relatives but left the ceremony without making a statement.

Foreign Minister Sergey Lavrov praised the deceased envoy, who was 62, and paid his respects to his mother Maria, widow Marina and son Gennady, also a diplomat, as the ambassador's body lay in state in a flower-decked coffin.

"We are saying goodbye to our friend Andrey Karlov who became a victim of a malicious, vile terrorist attack while in the line of duty," Lavrov said at the ceremony held in the foreign ministry headquarters.

"We will never forget Andrei."

A religious service was later expected to be held at Moscow's Cathedral of Christ the Saviour led by the head of the Russian Orthodox Church Patriarch Kirill before the ambassador is laid to rest at a cemetery.

In terrifying scenes captured on photo and video, 22-year-old off-duty policeman Mevlüt Mert Altıntaş shot the ambassador nine times in the back on Monday while he was delivering a speech at an exhibition of photographs of Russia in Ankara.

The ambassador fell to the ground and later died in hospital.

The assailant, who was off-duty and managed to circumvent the metal detectors by flashing his police credentials, shouted "Allahu Akbar" (God is greatest) and "Don't forget Aleppo" after targeting Karlov and was himself killed in a subsequent shootout with Turkish guards.

Police discovered pro-FETÖ literature belonging to Altıntaş and sympathisers of the preacher in his circle.

A group of Russian investigators has been working on the probe in Turkey since Tuesday.

Turkish prosecutors on Thursday said they have released six relatives of Altıntaş who were detained for questioning in the wake of the attack.

Thirteen people were arrested in the murder probe and police were looking for 120 people, authorities said.

Russia has bestowed a prestigious Hero of Russia honour on Karlov posthumously, while his alma mater MGIMO Institute of International Relations has initiated a scholarship in his name.

Karlov studied Korean and Japanese as he trained for his diplomatic career and worked for many years in North Korea, including as ambassador between 2001 and 2007. He has served as envoy to Turkey since 2013.