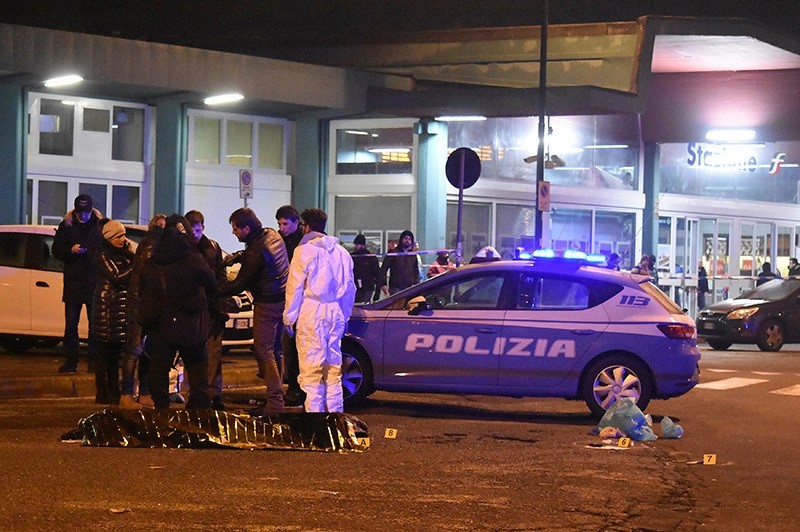 Italian Police officers work next to the body of Anis Amri, the suspect in the Berlin Christmas market truck attack, in a suburb of the northern Italian city of Milan, Italy Dec. 23, 2016. (Reuters Photo)
by Compiled from Wire Services Dec 23, 2016 12:00 am

Anis Amri, the Tunisian suspect in the deadly Berlin Christmas market attack, was killed in a shootout with police in Milan, officials in Italy said Friday, ending a four-day Europe-wide manhunt.

Amri's identity has been confirmed "without a shadow of a doubt," Italian Interior Minister Marco Minniti said in a press conference, adding that fingerprints taken from the suspect matched those found in the attack vehicle.

The suspect was stopped for a routine check at around 3 am (0200 GMT) in Sesto San Giovanni, in the northern outskirts of Milan. When an officer asked him for his documents, Amri pulled out a gun and shot him. He was killed when police fired back, the minister said.

The officer is in hospital, but is not in life-threatening condition.

"Anis Amri was not carrying any documents, but a loaded .22 gun. His identity was confirmed by forensic police who arrived on the scene immediately after the event," Italian police said in a Facebook statement detailing the events.

Italy's Corriere della Sera newspaper reported that police officers found a ticket for a train from Chambery, in south-eastern France, arriving in Milan at 1 am - just two hours before he was shot dead.

A spokesman for Germany's Interior Ministry declined to confirm that the suspect killed in Milan was Amri, but said it would be "relieved" if there is confirmed of the suspected Berlin attacker's identity.

"We remain on maximum alert, threats must not be underestimated, but what happened last night I think should allow all of our citizens to know that the state is present, that Italy is present," the prime minister said.

Amri had been missing since escaping after Monday's attack in central Berlin. He had links to Italy, having arrived in the country from his native Tunisia in 2011.

Shortly after his arrival in Italy he was sentenced to a four-year prison term for starting a fire in a refugee centre. He was released in 2015 and made his way to Germany.

German police said Amri steered the 40-tonne truck in the attack after finding his identity papers and fingerprints inside the cab, next to the body of its registered Polish driver who was killed with a gunshot to the head.

In Tunisia, a brother of the fugitive had appealed to him to surrender and said: "If my brother is behind the attack, I say to him 'You dishonour us'."