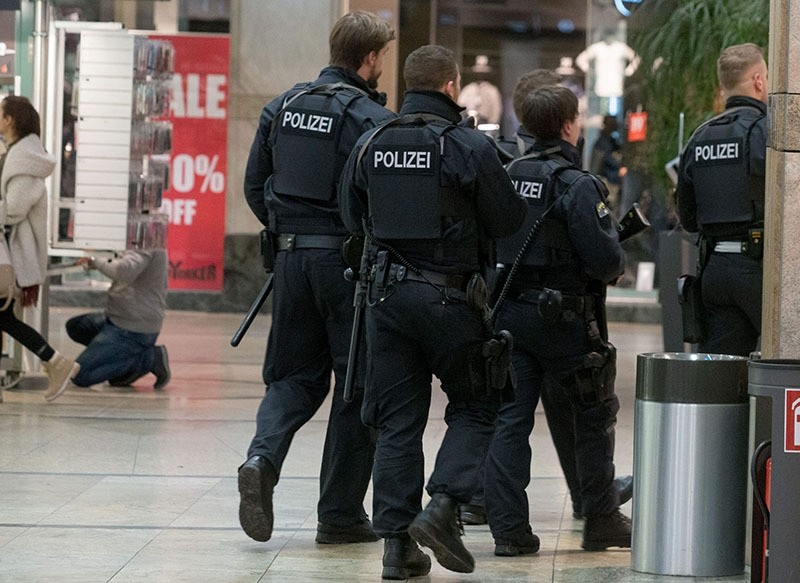 A unit of police officers is seen during a security operation in the shopping center Centro in Oberhausen, Germany, 22 December 2016. (EPA Photo)
by Compiled from Wire Services Dec 23, 2016 12:00 am

Police special forces arrested two men suspected of planning an attack on a shopping mall in Oberhausen in the West German state of North Rhine-Westphalia, police said on Friday.

The suspects, two brothers aged 28 and 31 who were born in Kosovo, were arrested in the city of Duisburg after information provided by security sources, police said in a statement.

Acting on a tip-off from the intelligence services, police were deployed to the shopping complex and a nearby Christmas market in the western city of Oberhausen late Thursday, they said.

Authorities are probing how far along the suspected attack plan was and whether anyone else was involved.

The mall that was targeted, CentrO, is one of the largest in Germany with around 250 shops that are usually packed in the run-up to Christmas.

The arrests came just before police killed the man believed to be the suspect in the Berlin Christmas market truck attack, 24-year-old Anis Amri, in a shoot-out in a suburb of the northern Italian city of Milan on Friday.

Daesh has claimed responsibility for the assault -- their deadliest yet carried out on German soil.

Police say they are certain it was Amri who steered the 40-tonne lorry after finding his identity papers and fingerprints inside the cab, next to the corpse of its registered Polish driver who was killed with a gunshot to the head.

Chancellor Angela Merkel said she was "proud of how calmly most people reacted" to Germany's deadliest attack in years and voiced confidence Amri would be arrested soon.