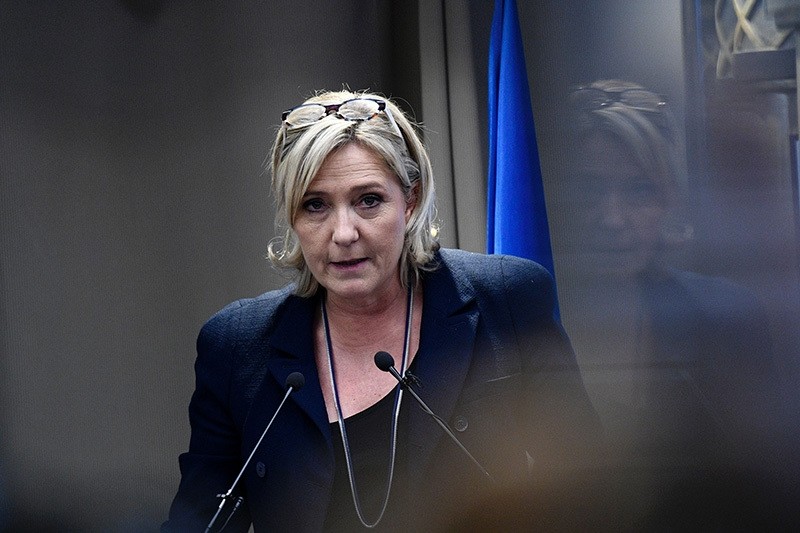 While recent polls show a slight fall in the far-right Front National party leader rating, Le Pen ramped up his opposition to NATO and the European Union, promising to deliver a referendum on Frexit

The far-right leader of the National Front Marine Le Pen urged EU member states to end Brussels' hegemony while calling for the delivery of a referendum on France's EU membership. Her remarks over Frexit came after the Berlin terror attack, which is seen as a recent cross-border security failure.

"Frexit will be a part of my policy," Le Pen said in an interview with Greek newspaper Dimokratia, as reported by the Sunday Express. "The people must have the opportunity to vote for the liberation from slavery and blackmail imposed by technocrats in Brussels to return sovereignty to the country," she added.

Resistance to immigration, anti-EU and anti-eurozone are central issues to the campaign platform of National Front leader Marine Le Pen in her bid for the French presidency in elections next year.

Le Pen, the National Front leader, wants to stop what she calls "massive" immigration and is urging an exit from the European Union and the 19-nation eurozone currency. Opinion polls suggest the leader of the National Front (FN) will finish second in next year's presidential election, but she is hoping for new momentum after Donald Trump's victory in the United States.

For two years, disaffection with mainstream politics and disarray among her opponents has played to Marine Le Pen's agenda. However, as the days tick down to election year in France, events may have started to dim her presidential prospects. Since late November, the anti-immigrant, anti-globalization far-right National Front candidate's showing in opinion polls has slipped from about three out of 10 voters to one in four.

A Harris Interactive survey after the Nov. 27 presidential primary put Le Pen on 24 percent of voting intentions, behind republican presidential candidate François Fillon on 26 – her lowest score in months, and one that has not improved since.

The choice on Nov. 27 of Francois Fillon as Le Pen's main conservative challenger in the Republicans party primary was among the first signs of trouble.

She put a brave face on the victory for the former prime minister, whose socially conservative views on abortion and gay marriage are attractive to many Le Pen supporters and helped land him the ticket ahead of the more centrist Alain Juppe.

She focused instead on Fillon's aggressive plans to slash public sector spending, calling it an attack on the French workers she and her second-in-command, Florian Philippot, have promised to protect.

Another hurdle for Le Pen is the youthful Emmanuel Macron's announcement on Nov. 16 that he too will run for president, as an independent candidate who rejects the traditional politics of Left versus Right.

Opinion polls since then show the 38 year-old former economy minister consistently in third place. He is still well behind Le Pen and Fillon, but even before he launched officially, some of her worst scores were in scenarios where he stood against her.

Macron has yet to get down to deep policy specifics, and has targeted the center, but pollsters detect a brand of "populism-light", and say his independence and youth could blunt Le Pen's anti-establishment appeal.

If current popularity levels were to convert into voting in April's first round, Le Pen would be out of the running at Macron's expense.