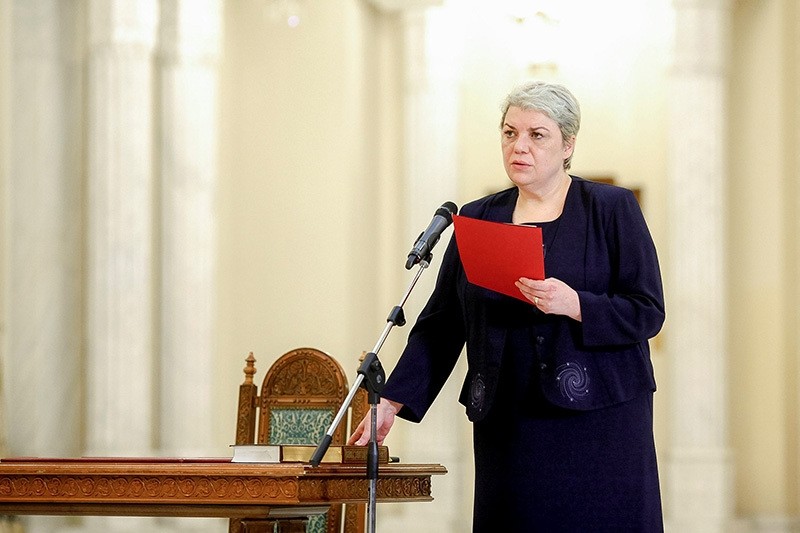 Sevil Shhaideh is sworn in for the position of minister for regional administration and public administration, in Bucharest, Romania, May 20, 2015 (Reuters Photo)
by Associated Press
Jan 03, 2017 12:00 am

A Romanian economist who had been poised to become the country's first female and Muslim prime minister was offered a job as deputy premier Tuesday after the country's president declined to nominate her for the top government job.

Liviu Dragnea, chairman of the Social Democratic Party which won the Dec. 11 election, said that Sevil Shhaideh, the party's first choice for premier, would serve as deputy premier and as regional development minster, a spot she briefly held in 2015.

President Klaus Iohannis decided against nominating Shhaideh, a political novice, because of concerns over the support her Syria-born husband had expressed for Syria's Bashar Assad on social media.

Parliament is expected to approve the 26-member coalition government Wednesday. It has four more ministries than the previous technocrat-led government and eight of the portfolios are held by women. Dragnea named close ally Carmen Daniela Dan to the key post of interior minister, which would make her the first woman to hold the post.

"We have a program to govern," Prime Minister-elect Sorin Grindeanu, a regional politician who was nominated last week, said. "It urges us to show responsibility, modesty and respect for Romanians."