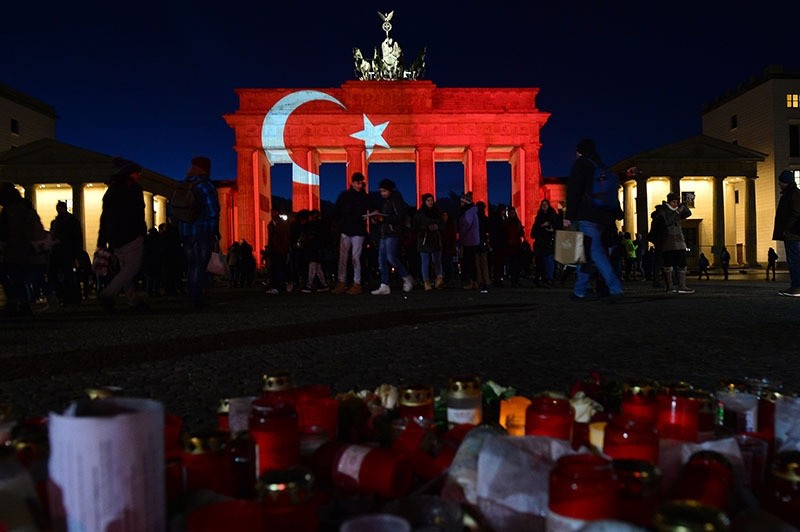 The Brandenburg Gate in Berlin, one of Germany's best-known landmarks, was illuminated with the colors of the Turkish national flag on Monday evening to honor the victims of the Istanbul nightclub attack that killed 39 people and injured 65 others on New Year's Eve.

"The new year has begun with an inhumane act of terrorism in our sister city of Istanbul," said Berlin Mayor Michael Müller.

"This act, just like the truck attack before Christmas here in Berlin, deserves nothing but the deepest disgust. We mourn with Istanbul and our thoughts are with the victims and their families," he added.

Müller also sent a letter of condolence to his counterpart, Istanbul Metropolitan Mayor Kadir Topbaş, according to his press office.

Dozens gathered at the Pariser Platz in Berlin, which is located right next to the Brandenburg Gate, and prayed for the victims.

This was the second time that the Brandenburg Gate has been illuminated with the colors of the Turkish national flag. The Berlin landmark previously showed solidarity in red-white, after the terrorist attack at Istanbul's Atatürk Airport last June.

On early Sunday, an armed assailant opened fire at the popular Reina nightclub in Istanbul and escaped afterwards, killing 39 people and wounding 65 others. Some 27 of the attack victims were identified as foreigners, 11 were Turkish citizens, officials announced on Monday.

At least two victims of the attack claimed by Daesh terrorist group were announced as German nationals of Turkish origin. German Foreign Ministry Spokesman Martin Schaefer declined to name them, but said it appeared one was a German-Turkish dual citizen and the other was believed to have had only Turkish nationality. Three German citizens were wounded in the attack, he said.

Despite moves to show solidarity with Turkey in Daesh attacks, Germany has been harshly criticized by Turkish officials for ignoring the propaganda, fundraising and recruiting activities of the PKK terrorist group, which has killed numerous civilians and security officials in suicide bombings and other attacks
Last Update: Jan 03, 2017 1:48 pm
RELATED TOPICS