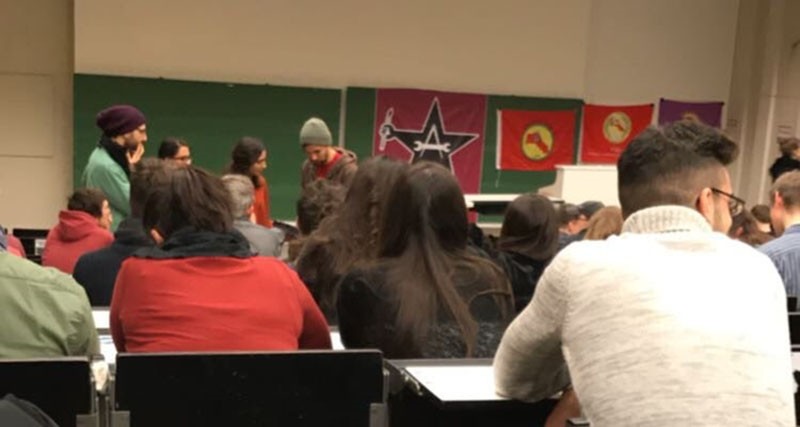 Sympathizers of the PKK, which is officially classified as a terrorist organization by Germany and the EU, made propaganda at the Technical University of Berlin on Thursday leading many to question their influence within German educational institutions.

A banner with the title "Resistance means life", showing PKK terrorists dancing in a circle with several upcoming PKK meetings listed below, went viral on social networks. All of the forthcoming meetings are due to be held at the Technical University of Berlin.

PKK supporters are known to use propaganda and recruit at German state universities without any restrictions. Why the university administration allows such events, even indirectly supporting in some cases through allowing the advertising, remains unclear.

The latest invitation included a film screening of "My whole life was a fight" and a speech entitled "Kurdistan on the move", in which the role of the PKK terrorist organization is played down.

"German Justice Minister Heiko Maas and Interior Minister Thomas de Maizière are asked to immediately put an end to this activity," Yeneroğlu said in a written press release, underlining that the PKK was not a harmless cultural association but an organization that has murdered tens of thousands of people.

"The PKK continues to carry out bomb attacks causing the death of security forces and civilians financed with money from blackmailing, arms and drug deals," the press release continued, emphasizing that Turkey expects Germany to actively support the fight against terror.

Germany should take concrete action from now on, after having regularly declared solidarity with Turkey, and also out of respect for the victims of PKK terror, Yeneroğlu added.

The PKK has continued to spread throughout European countries since 1999. In 2002, the European Commission officially classified the PKK as a terrorist organization.

However the PKK still enjoys great freedom under the protection of the EU. The Turkish government has repeatedly warned the EU of the PKK's threat, but the EU continues to allow their activities. Thousands have lost their lives in PKK attacks.

The PKK is still being politically and financially supported by the Union.

Between 2006 and 2016, Turkey has demanded the extradition of a total of 136 PKK terrorists from Germany. The German government has agreed to hand over only three of them to the Turkish authorities, the Ministry of Justice announced.

Similarly, the extradition of 263 other terrorists between 2007 and 2016 has been demanded from the entire EU. Only eight of them were delivered.