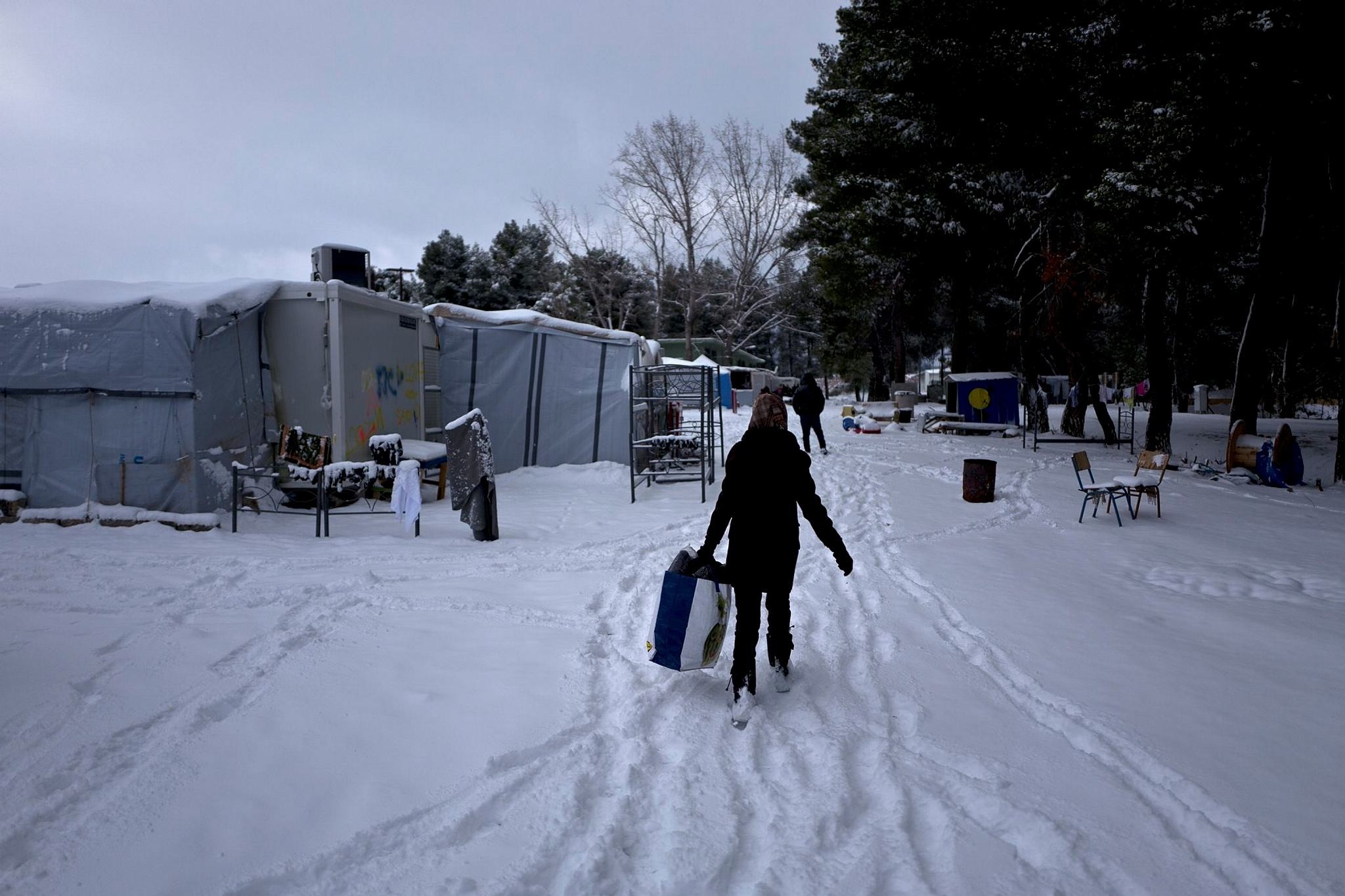 Syrian refugees walk at the refugee camp of Ritsona about 86 kilometers (53 miles) north of Athens, Tuesday, Jan. 10, 2017. (AP Photo)
by Jan 10, 2017 12:00 am
Refugees stranded in Greece suffered sub-zero temperatures and heavy snowfall on Tuesday at camps not designed for winter weather and the government promised those on one island temporary warm accommodations aboard a navy ship.

A mid-winter icy spell and snowstorms have gripped central and southeastern Europe for days, and parts of Greece have been covered in rare snow with temperatures dipping to -20 degrees Celsius this week. Snow also fell in Athens on Tuesday.

More than 60,000 refugees and migrants have been trapped in Greece since Balkan countries along the main, northward overland route to wealthy western Europe sealed their borders last March. Most now live in overcrowded camps across Greece in abandoned factories or warehouses, or in tents which lack insulation or heating.

"Cold, it's very cold for children - it's not like Syria," said Rostam, a 34-year-old Syrian Kurd who has been living in a camp near the village of Ritsona in eastern Greece near Athens for 10 months with his wife and three young children.

Temperatures hovered at -1 degrees at the camp, a collection shipping containers in a forest where clothes left on hanging on lines outdoors had frozen stiff.

Humanitarian aid organizations, including the United Nations refugee agency UNHCR, have pressed Greece to quickly transfer those on freezing, snowbound Aegean islands to the mainland or other European countries.

"Power outages, freezing temperatures, snow and freezing rain have hampered access to some refugee camps and created very hazardous conditions for all those in temporary shelters."

Conditions were considerably worse on the eastern Aegean island of Lesbos, where more than 5,000 asylum seekers have been waiting for months for their applications to be processed.

Scores of summer tents weighed down by thick snow resembled igloos after several days of icy weather on the island. On Tuesday, the government said it was sending a naval ship to Lesbos to accommodate migrants. It was also scrambling to transfer others to hotels.

"It is important to take immediate measures to ensure that men, women and children are housed in decent accommodation suitable for winter," the Greek branch of global health charity Medecins du Monde said in a statement.

For some refugees who have been in limbo in Greece for months, things have been worse.

"It's normal, we're used to living like this," said a 25-year-old Syrian who gave his name as Ahmad, one of the first to arrive in the Ritsona camp. "This is not one day or two days, this is 10 months."