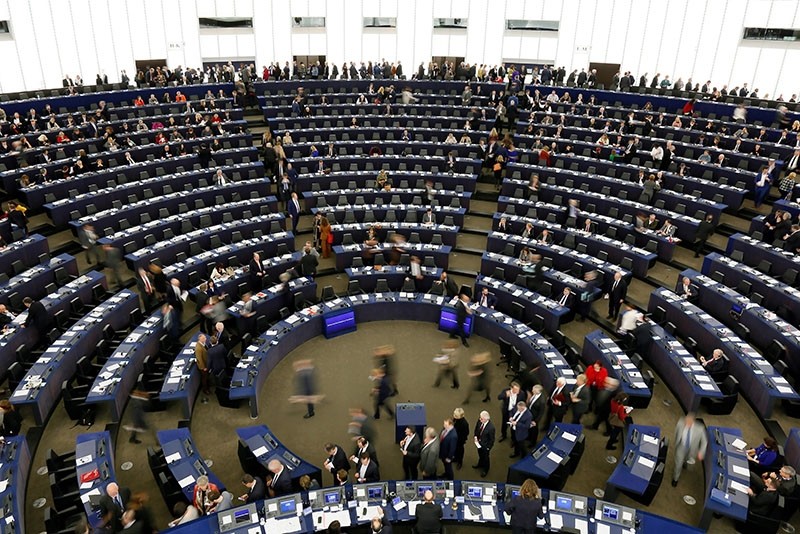 Members of parliament prepare to cast their ballot for a new president at the European Parliament in Strasbourg, France, 17 January 2017. (EPA Photo)
by Jan 17, 2017 12:00 am

EU lawmakers were set to go into a third round of voting on Tuesday to find a successor to the current president of the European Parliament, Martin Schulz, who is leaving Brussels to return to German politics.

As expected, none of the six candidates were able to secure more than half of the votes during the first two rounds of voting. Parliamentarians were set to cast their ballots in subsequent rounds for the rest of the day, as candidates try to broker deals to get the necessary support.

The field narrowed slightly after the seventh candidate, Guy Verhofstadt of the liberal Alliance of Liberals and Democrats for Europe (ALDE) party, decided to leave the race before the first round of voting, which is being conducted in the French city of Strasbourg.

The election is not without drama amid a spat between the parliament's two largest political groups: the right-leaning European People's Party (EPP), the largest parliamentary group, and the social-democratic Progressive Alliance of Socialists and Democrats (S&D).

During the first two rounds of voting, EPP candidate Antonio Tajani of Italy emerged on top, receiving 274 votes in the first round and 287 in the second. But that still fell short of achieving an absolute majority required to clinch the post.

Defining an absolute majority is a bit of a moving target, since it is based on the number of valid ballots cast, not the number of seats in the parliament.

The S&D's candidate, Gianni Pittella, who is also from Italy, came second in both rounds with 183 votes and 200 votes respectively.

According to a document published last week by the EPP, the center-right group agreed in 2014 to support the election of S&D's Schulz in return for having an EPP candidate elected the following term.

The S&D are now arguing against the election of a center-right candidate, saying it would put conservatives in charge of all major EU institutions: the commission, the council and the parliament.

In the first three rounds of voting, a candidate needs an absolute majority among valid ballots cast by the 751 members of parliament. Neither party has a big enough membership to elect its candidate this way, which is where the deal-making comes into play.

The election is expected to go into a fourth round, at which point an absolute majority is no longer required and victory can be claimed by the candidate who receives the most votes.