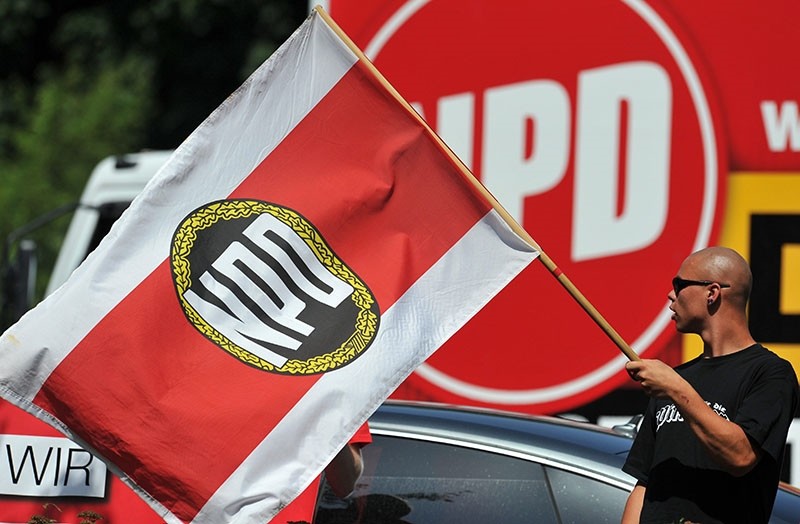 A participant of the far-right National Democratic Party of Germany (NPD) rally waves a flag in Fuerstenwalde, Germany, 03 August 2013. (EPA Photo)
by Compiled from Wire Services Jan 17, 2017 12:00 am

Germany's supreme court on Tuesday rejected a bid by lawmakers to outlaw a fringe far-right party accused of pursuing a racist and anti-Semitic agenda.

Andreas Vosskuhle, chief justice of the Federal Constitutional Court, said that while the party's goals run counter to the German constitution, "there are currently no concrete indications ... that its actions will lead to success."

Vosskuhle, in explaining the verdict, cited the party's political irrelevance, pointing out that it has only a single seat in the European Parliament and that the NPD's election results have in recent years been "on a low level."

Vosskuhle said that a party's questionable ideology alone wasn't reason enough for a ban. A party would need to be actively working to abolish Germany's free and democratic order, he said, adding: "There's no evidence for this here."

"No ban alone would get rid of xenophobia and racism," he said in a statement. "Society's struggle against far-right extremism isn't something others can do for us."

The NPD could not immediately be reached for comment, but celebrated the verdict on Facebook saying it was "now fully back in business."

The head of the World Jewish Congress voiced disappointment at the verdict and warned that the party shouldn't be underestimated.

"We must never forget how little time it took Hitler and his party to destroy German democracy, to murder 6 million Jews and to plunge the entire European continent into mayhem," Ronald S. Lauder said in a statement. "The situation today may be different, but there is absolutely no reason to be complacent. Germany must continue to combat the neo-Nazi movement vigorously."

The German parliament's upper house, which represents the country's 16 state governments, applied for the ban at the end of 2013. It was the second attempt to ban the National Democratic Party, better known by its German acronym NPD.

Officials said that the party violated the German Constitution and were keen to cut off NPD's state funding, to which all political parties are entitled.

Only two parties were outlawed in West Germany and reunited Germany — the neo-Nazi Socialist Reich Party in 1952 and the German Communist Party in 1956.

The constitution states: "Parties that, by reason of their aims or the behavior of their adherents, seek to undermine or abolish the free democratic basic order or to endanger the existence of the Federal Republic of Germany shall be unconstitutional."

Founded in 1964 as a successor to the neo-fascist German Reich Party, the NPD calls for "the survival and continued existence of the German people in its ancestral central European living space" -- or simply, "Germany for the Germans".

Such language flirts with the turns of phrase used under the Nazi Third Reich.

Germany's domestic intelligence services classify the ultra-nationalist NPD with its 5,200 members as a far-right party.

A previous attempt to ban the NPD failed because the presence of undercover state informants within party ranks was seen as sullying the evidence.

While those informants have since been "deactivated," the judges have voiced doubts over the danger the NPD poses to the democratic order.