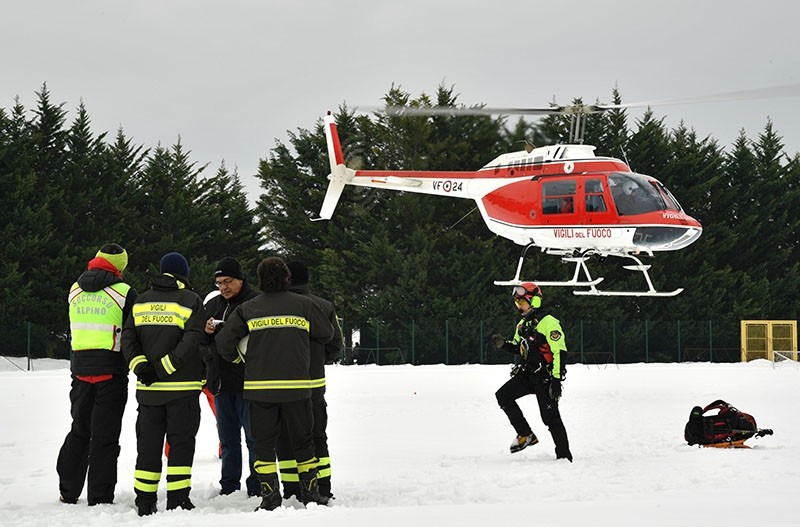 Italian Air Rescuers join the rescue operation near the village of Penne, after an avalanche engulfed the mountain hotel Rigopiano in Farindola in the earthquake-ravaged Italy, on January 20, 2017. (AFP Photo)
by Compiled from Wire Services Jan 20, 2017 12:00 am

Italy's civil protection chief says five of the 10 people found alive inside an avalanche-covered hotel have been pulled out and that rescue crews are working to get the other five to safety.

Chief Fabrizio Curcio said four of the five extracted alive were children, suggesting that all the children in the hotel at the time of Wednesday's avalanche were accounted for.

One of the boys who was rescued has been identified: 8-year-old Gianfilippo Parete, who emerged from the structure along with his mother, Adriana Vranceanu, 43.

His father, Giampiero Parete, had sounded the alarm about the avalanche, begging his boss to rally rescue crews. He had walked to the car just minutes before the avalanche struck the hotel.

As Vranceanu emerged she pointed back inside, apparently giving rescue workers directions on how to find her 6-year-old daughter, Ludovica.

Evacuated by helicopter, the rescued survivors were taken to hospitals in the cities of Pescara and Aquila. Some were being treated for hypothermia but no-one was in a serious condition, officials said.

They were pulled out after more than 40 hours under the snow-covered rubble of the Hotel Rigopiano, a three-storey spa hotel on the eastern lower slops of Monte Gran Sasso, the highest peak in central Italy.

Marco Bini, an officer with the mountain rescue wing of the GDF financial police, told AFP the survivors seemed to have been able to light fires to keep themselves warm as temperatures plummeted at 1,200 meters altitude.

"We saw smoke, there were a few small fires in the rubble, and where there is fire there is air so we started to dig."

He said six people had been found together in an air pocket, including a mother and child. "They were all in reasonable health, if very cold."

"The fire will have been using up the oxygen so we were lucky to find them."

With 15 GDF rescuers and firefighters digging, the survivors could hear their efforts and knew help was on its way, Bini said.

"Their faces said it all, it was like they had been reborn.

"After all the work we are overjoyed to have found them alive."

A video released by firefighters showed a young child, apparently a boy of about six, being pulled out of a vertical tunnel in the snow. He seemed to be in good condition as firemen mussed his hair.

"More diggers are arriving on the site now. We studied a plan of the layout of the hotel but after the avalanche it wasn't clear what was where," he told AFP, saying the search would continue.

"We hope there are other pockets of air, and the snow will have prevented anyone inside from getting too cold, it isolates like an igloo."

More than 25 people, including several children, were thought to have been in the hotel when it was hit by a massive wall of snow.

Revised estimates on Friday suggested the total could be as high as 34, among them 20 to 22 guests, seven or eight staff members and an unknown number of casual visitors to the four-star hotel.

Taking into account the two bodies found in the early hours of Thursday when rescuers first reached the site, that would leave a minimum of 17 and a maximum of 24 people left under the ruins.

Most of the guests were thought to have been in or around the hotel's entrance when the avalanche struck late Wednesday afternoon.

They had been waiting for transport to take them home after earthquakes in the region earlier in the day.

Scores of mountain police, firefighters and other emergency personnel were deployed at the hotel.

Progress was agonizingly slow, with rescuers wary of triggering further movements in the snow piled up on top of the masonry that could endanger anyone still clinging to life under the rubble.

Lorenzo Gagliardi, one of the first mountain police officers to arrive on Thursday morning, had earlier recounted the apocalyptic scene he found there in an interview with AFPTV.

Two men who had been outside the hotel were found alive in their car but two other people located under the ruins could not be saved.

Gagliardi and his colleagues had trekked for more than eight kilometers (nearly five miles) through two-meter-high snow to reach the hotel around 4:00 am on Thursday.

There they found a car with its engine running with survivors Giampiero Parete and Fabio Salzetta inside.

Parete, a 38-year-old chef, told the rescuers that his wife, son and daughter were in the hotel.

"We were ready to leave at 2:00 pm. We were in the foyer with our bags, we'd paid the bill and were waiting for a snow plough to clear the road," he reporters after treatment for hypothermia.

"My wife told me she had a headache so I went to the car to get some pills for her.

"As soon as I got out I felt this wind and then this deafening noise of trees cracking, trunks cascading down the hillside.

"Then the hotel collapsed under this enormous wave of snow and half the mountain. My car was the only thing that escaped, by a few centimeters."

The avalanche followed four earthquakes of more than five magnitude in the space of four hours earlier on Wednesday.

The national civil protection agency confirmed two more deaths as a result of the quake, taking the total to five, including the two at the hotel.